Wife Jan’s college friends are visiting and I have been cooking up a storm. I had decided to make Hoe-waffles and it seemed a bit of a scant breakfast. I had a couple of pears in the basket I and decide to make a side fruit salad. Pears just by themselves seemed just too plain, so I quickly thought to add some marmalade. 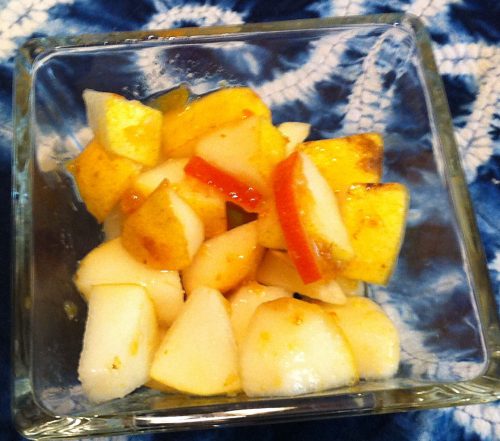 Tip: It is not necessary to peel the pears—unless you want to—but cut away any bad spots.

Note: I quarter the pears from top to bottom and slice away the stem and core. I then slice the quarter in half—to make eight pieces—slicing cross ways into small pieces.

2. Put the pear chunks into a bowl and add the marmalade.

Tip: Any marmalade will do, But I had some of my own on hand.

Note: I had one guest who could not eat citrus, so I took out one portions to serve plane.

3. Gently toss the pears to completely coat them with the marmalade.

Tip: If your marmalade has bits of rind place some on top as a garnish.

One response to “Karl’s Pears with Mandarin Marmalade”