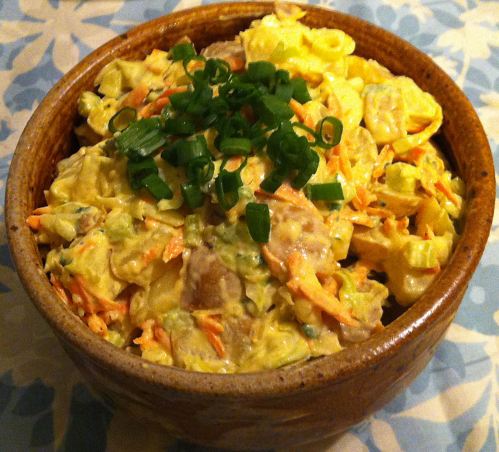 Do you ever get the feeling that you want to make both potato salad and coleslaw?  T wondered what would happen if you mashed the two together. This is a complete experiment.

1. Put the potatoes in a pot and add water to cover.

3. Reduce the heat, cover, and simmer the potatoes for 20 minutes.

4. Remove the pot from the heat and let the potatoes finish cooking in the residual heat of the water.

Tip: The potatoes are done when you can slide a knife easily into the thickest piece of potato.

Note: This is an energy saving tip. The residual heat of the water will finish cooking the potatoes.

5. Drain and cool the potatoes.

6. Add all of the ingredients—except the potatoes-to a large mixing bowl and blend them together thoroughly.

Tip: The vegetables will withstand a lot of rough handling, but the potatoes will not.

7. Check the seasoning of the salad and adjust as necessary.

8. Cut the potatoes into your preferred size—⅜-¾ inch dice.

9. Gently fold the potatoes into the vegetables and dressing.

Note: If you prefer a more smashed potato salad, crush the potato chunks with a metal whisk and briefly whisk them into the salad.

10. Cover the salad with plastic wrap and the it meld for at least 1 hour.

Note: If you make the salad more than an hour in advance of dinner, refrigerate it and then set the salad on the counter to warm to room temperature half an hour before serving.

11. Garnish with green onion and serve just below room temperature.