Daughter Miriam—who is still avoiding garlic and onions—has requested tomato soup and melted cheese sandwiches for Sunday’s dinner. She had bought a store “fresh” tomato soup and it had so much garlic that she could not eat it. Looking on-line for ideas, I find that virtually all of the recipes called for using at least one of the forbidden ingredients. 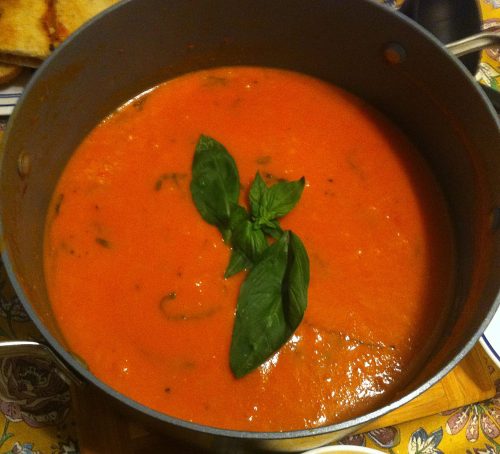 Note: Even in my house there are people who would want their garlic and onions. I have developed a solution to this dilemma—a “float” of onion/garlic sauce on the side to add in as desired.

I got some ideas for ingredients and spices, but none of the recipes were quite what I was looking for. In addition to the garlic and onions, the ingredients lists I found covered a very wide range of additional vegetables—carrots, celery, peppers, and even zuchini.  The most common herbs added were basil, rosemary, thyme, or a combination of these herbs. While a few recipes were dairy free, most included some milk products—cream, Parmesan, or goat cheese. Others had other unusual ingredients—such as bacon, harissa, or saffron. Finally, there was a wide range of soup thickeners as well—beans, bread, rice, or roux.

Note: One thing I noticed was that many of the recipes claiming to be “from scratch” started with canned tomatoes and tomato paste. This is a very liberal use of the term.

While I loosely based my soup on a Wholefully recipe, I discarded some ingredients and added others from several of the other recipes as it suited my needs. Having remove the “standard” aromatics—garlic and onions—I used celery and carrots as a substitute. I had originally thought not to use any canned tomato products, but when I had blended my tomatoes they were so pale pink, that I decided to add some tomato paste to enhance the color. I served melted cheese sandwiches and a spinach salad with my soup.

Note: Of you do not need to keep the onions and garlic separate, you may simply cook them with the celery and carrots.

1. Heat one tablespoon of oil in a small pot and sauté the onions with the salt  until just starting to pick up some color.

Tip: Adding salt softens the cell wall and draws out the onion’s juices, which cause them to brown more quickly.

2. Pull the onions to the sides of the pot and sauté the garlic in the hole in the center.

4. Cover the pot and turn the temperature to its lowest setting.

Tip: Stir the garlic/onion sauce from time to time.

Note: I forgot about my sauce as I was making my other dishes. When I remembered them the liquid had boiled away and the bottom of the pot was starting to turn dark brown. It turned out to be a “happy accident,” adding water saved the sauce and the over cooking had produced a mellow and flavorful sauce.

Tip: Do not peel the tomatoes.

Note: Scrape the seeds into a sieve set over a bowl. Much of the flavor in tomatoes is in the peel and the gelatinous “jelly” around the seeds. Press the jelly through the sieve and discard the seeds—if you blended the seeds into the soup they could add a bitter taste to your soup.

6. Heat the rest of the oil into a large soup pot and add the celery and the ½ teaspoon of salt.

7. Sauté the celery until translucent, about 4 minutes.

8. Add the carrots and continue sautéing until the carrots start picking up some color, about another 4 minutes.

9. Transfer the vegetables to a standing blender and add the tomato juices that you pressed from the seeds.

Tip: If necessary add a splash of the broth.

Note: Last Christmas, the kids got me a Blendtek blender—Miriam was apparently tired of trying to make margaritas in my old Oster blender which did not crush ice very well. Blendtek’s sales pitch is what their blender does to an Iphone—it is worth watching the video.

Tip: Pureeing the vegetables first guarantees that the blades will not be chasing small chunks of the vegetables through the thinner soup after you add the tomatoes.

11. Add the tomato chunks to the blender and process them for 4-5 minutes.

Tip: I planned to have my soup taste closer to the fresh taste of a gazpacho, rather than the deep, thick taste of a long simmered tomato sauce. I decided to blend the tomatoes raw and then simmer the soup for only a short time.

Note: If you are using an older blender you may need to sieve out the larger pieces of skin that is left after blending. I had sieved my soup after blending. My new blender had chopped the skins so finely that there was almost nothing left in the sieve after I was done pushing everything through. With this blender sieving the soup was unnecessary.

12. Add the tomato paste to the blender and process the mix for one more minute.

Note: I noticed that the blended tomatoes were a very pale pink, rather that the deep red that I had been hoping for—I thought that the addition of tiny bits of red peel would have had a greater effect on the color. I decided that I would have to add some tomato paste to darken the red color.

14. Rinse the dregs of the soup out of the blender with some of the broth.

Note: Before cleaning the blender jar, add the garlic and onion sauce to the jar and blend it for one minute. Rinse the sauce back into the small pot with a bit of broth and continue simmering it. This guarantees a smooth sauce, rather than a chunky one.

15. Add the bread, basil, celery seed, pepper and salt to the pot and simmer the soup for five minutes.

Tip: Season the soup to taste.

Note: Adding bread to thicken a soup is frequently use in Spanish cooking.

16. Garnish the soup with some basil leaves and serve with the garlic/onion sauce on the side.

Tip: Have some more chiffonade basil on the side for individual diners to add to their soups as desired.