I was craving Japanese food this week, so I decided that that would be the theme for my Sunday dinner. In particular, I wanted barbecued teriyaki salmon. Today, I wondered what would happen if I mixed miso into my teriyaki sauce. 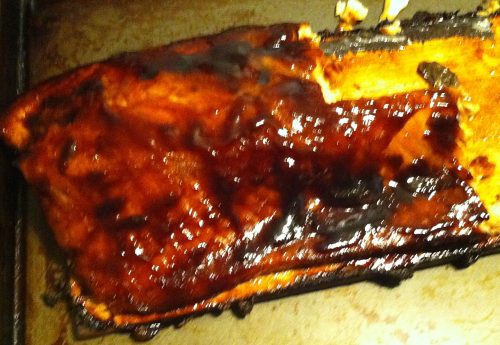 I was making a lot of pickles for this meal, so pickling—marinating—the fish as well seemed like a reasonable extension. The Japanese use several different pickling techniques, two of which are miso and soy sauce. Combining these in my sauce and pickling the fish overnight was an experiment worth trying.

Hint: It was a really good decision!

Japanese cuisine uses a relatively small number of ingredients to create an amazing variety of tastes, textures, and contrasts in their dishes. Whereas in Western dishes where it is possible for all of the ingredients of a meal to end up in a single pot, the Japanese diner will be served several individual small plates of assorted meats and vegetables of contrasting flavors and colors.

Note: I do not own so many small dishes, so I serve “family style.”

While a traditional Japanese meal consists of a soup and three sides—the rice goes without saying—there is not really a limit on the number of side dishes allowed for a feast. For this meal, I got a bit carried away with my sides. In addition to the salmon, I made miso soup, futomaki, tofu salad, daikon and carrot salad, salt pickled cabbage, pickled cucumbers, pickled turnips, grilled shitake mushrooms , and grilled green onions.

After Dinner Note: You may have noticed in the photo that half of the salmon is already missing by the time I took my picture. As soon as it was on the table it started to disappear. My family said that, “Although I have made many spectacular grilled salmons, this was the best I had ever made.”

Tip: Microwave the sauce for one minute.

Note: The point here is not to boil the sauce, but to warm it enough to easily dissolve the sugar.

2. Scale the salmon and remove any bones.

3. Trim the fillet to fit on the plank.

Note: The wide front half of the fillet had a thin two inch wide flap of belly meat that hung over the edge of the cedar plank. The tail end of fillet over hung the end of the board by about four inches. While a half inch over hang is acceptable too much would lead to burnt fish skin. I trimmed the filet to fit the plank and cooked the scraps separately.

4. Put all of the salmon into a seal-able gallon bag and pour half of the teriyaki sauce over it.

Note: Reserve the remaining sauce to mix with the cornstarch to make the final glaze.

5. Let the salmon marinate for at least four hours.

Tip: This overnight is better.

Note: Soak your cedar planks in water for an hour before you are ready to start cooking.

6. Transfer the fillet, skin side down, onto the cedar plank and set it out to dry for 30 minutes.

Tip: Start your grill while the salmon is air drying.

Note: While the planked salmon cooks directly over the hot side of the grill, I used a bi-level fire because I wished to grill some vegetables and the salmon scraps at the same time.

7. Set the cedar planked salmon directly over the heat and close the grill.

Tip: Keep a spritzer bottle of water on hand, in case the cedar plank bursts into flames. You want it to smoke, not burn away.

Note: The heat will char the cedar plank and the smoke will impart its flavor to your fish.

8. Grill your salmon until fully cooked, about 30-40 minutes.

Tip: Insert a constant read thermometer into the thickest part of the salmon and set the alarm to 145º F.

9. While the salmon is grilling, put the remaining sauce in a small pan and bring it to a simmer.

10. Stir in the cornstarch slurry and continue simmering until the sauce has thickened, about 2 minutes.

11. Brush the glaze over the salmon during the last ten minutes of cooking.

12. Transfer the fillets—cedar plank and all—to a serving platter.