Miriam asked for Surf-and-Turf for her birthday and we are having several friends and relatives over, I decided I needed several starters to keep them at bay while I finished cooking.I though that a selection of small plates would give them something to nosh on while they waited. In addition to the cabbage, I made cucumber pickles and Shishitō. 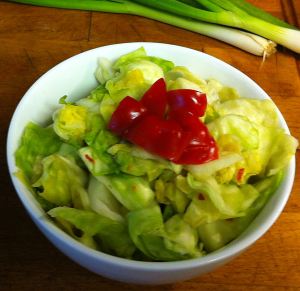 Japan has many Tsukemono, literally “pickled things.” When my father came back from Japan in the fifties, he introduced my family to Japanese cuisine. One dish that he learned to make was salt pickled cabbage (kyabetsu shio-zuke; キャベツ塩-漬け ).

He made this dish with Western green cabbage, not the usual Asian Napa cabbage. I knew that he had the recipe just right, because it tasted just like the tsukemono served in the Japanese restaurants in the LA area. It was salty and squeaky-crunchy and one of the delights of my childhood. We all could not wait for him to make another batch.

A while ago, I finally replicated his recipe. I had to add something—Japanese red chilies—just to give them a little kick. However, the last time I had torn the chilies into three pieces and there was only a little bit of the chilies flavor in the final pickle. This time I cut the chilies into tiny shreds, this was much better—lots of heat and flavor.

A couple of pieces of red bell pepper, as garnish (optional)

1. Cut the cabbage into one inch squares and break the leaves apart.

2. Put them in a large bowl and sprinkle the salt over the vegetables.

3. Use a spatula to mix and distribute the salt over the leaves.

4. Toss the vegetables several times over the next hour to coat all surfaces of the cabbage.

Tip: This hour starts the process of drawing the liquid out of the leaves and makes them a bit softer and easier to press down.

5. Wipe the kombu with a damp towel and put it in the bottom of a pickle press.

6. Use kitchen shears to snip the dried chilies into very small rings and mix them into the cabbage.

Tip: Depending on how spicy you want to make the pickles, you may discard all or some of the chili seeds or not.

7. Transfer the cabbage, and any liquid, to the pickle press and add a tablespoon or two of water.

Tip: You want the cabbage to be completely submerged when it is press down, but you do not want to dilute the brine too much.

Note: If your pickle press has a crank, turn it as down as tightly as you can and tighten it again after an hour.

8. Let the cabbage pickle for one to three days, the longer the better.

Tip: I have found that 2-3 days is the perfect length of time. Before that and the cabbage is not quite pickled enough. However, by day five it starts to grow a little limp, instead of crunchy

9. Drain, but do not rinse, the cabbage before serving.