Loosely based on a King Arthur recipe

Panettone is a classic Italian Christmas sweet bread. It has been a dish non grata in our house for years—since I almost choked to death on a dry commercial one on a Christmas long ago. Wife Jan thought that if I made a fresh one I would not have that problem. I had my usual problems with other peoples recipes, the quantities seemed a little off and I changed the dried fruits to those we had/preferred. 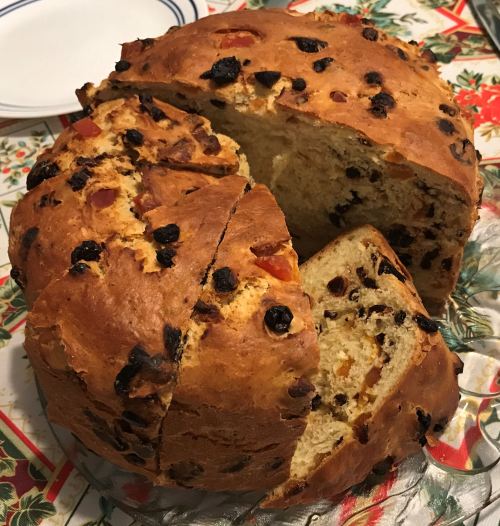 I had more than my usual number of errors in making this bread—baking when you are half asleep is always a challenge. I forgot to add the starter when I was mixing my dough—once you have formed your dough into a firm ball, it is quite difficult to work in another wet ingredient. Since I was running out of time—before the brunch I was planning to serve this at—I had turn the oven on to a low temperature—to speed the final rising. I, then, forgot to turn off the oven after 2 minutes. When I checked on the panettone after 30 minutes, it had fully risen and half baked. Despite the errors the final loaf came out looking lovely.

After Brunch Note: This was the best panettone any of us had ever had.

Starter, begin the day before baking

1.Put the flour and yeast in a medium sized mixing bowl and whisk them together.

2. Add the water and mix until you have a loose dough.

Note: I found that the amount of liquid used in the original recipe to be insufficient. There was a large amount of dry flour left in the bowl.

3. Cover the bowl and allow the starter to rest overnight.

4. Put the two cups of flour, sugar, yeast, and salt into a medium bowl.

Tip: I was planning to make my panettone early in the morning, so I prepared the dry ingredients and chopped fruit—in separate bowls—the night before, as well.

Note: The original recipe had you dump all of the dough ingredients into a mixer together and blending until smooth. I always hand mix and knead breads. When you are adding butter to effect the gluten formation you need to work it into the flour before you add the wet ingredients.

5. Whisk the dry ingredients well and then add the softened butter.

Tip: Slice the butter into pats and work it into the flour with your fingers.

Note: The fat in the butter binds with the gluten forming proteins in the flour and prevents too much gluten from forming, while you knead the dough.

6. Mix the water, eggs, and flavoring(s) in a small bowl.

7. Make a well in the dry ingredients and add the starter and wet ingredients.

Tip: The original recipe made a big deal out of using SAF Gold instant yeast, Personally I found good results from using Fleischmann’s®.

Important Note: DO NOT add the dried fruit at this time.

8. Stir the ingredients until most of the dry flour is incorporated.

Note: In the recipe above you may notice that I left the amount of flour to use rather vague. I find it easier to make a wet dough ball before I start to knead. It is far easier to add dry flour to a wet dough, than to add liquid to an overly dry dough ball.

9. Spread a quarter cup of flour over a smooth work surface and scrape the dough onto the board.

Tip: You will be working at least another half cup of flour into your dough as you knead it into a soft, smooth ball.

Note: I know that some bakers treat bread making as a science—exactly so many grams of flour and water, no more and no less. I view it more as an art—I make a wet dough and then add flour while I am kneading until it “feels” and “looks” right.

10. Place the dough in a large bowl and cover it with a damp towel.

Tip: A warmed oven is a perfect place to let dough rise.

Warning!!:  Do not forget to turn off the heating elements after 2-3 minutes.

12. Gently punch down the dough and transfer it back to the smooth work surface.

13. Roll the dough out into a thick sheet and spread the chopped fruit over the surface.

Note: The original recipe calls for adding zest at this point. However, there is more than enough orange zest in my infused sugar.

14. Bring the edges of the sheet in toward the center and knead the fruit into the dough.

Tip: The fruit should be fairly evenly distributed throughout the loaf when you are done.

16. Shape the dough into a ball and place it in the pan.

Tip: Press down in the center so that it is fairly flat and fills the bottom of the pan.

17. Cover the pan with a damp towel and let the dough rise until it’s just crested over the rim of the pan, about 1 hour.

Tip: Check the dough after half an hour and if the dough is threatening to rise up to the towel, remove the towel. If you are raising your loaf in the oven, this is a good time to remove it and pre-heat your oven.

Note: If the dough rises all the way up to the towel it will stick and mess up the beautiful top crust of your panettone.

Note: While I am using the original recipes baking times here it is not how I did it. I had left the oven on at two hundred degrees and when I checked the loaf after half an hour it had par-baked up out of the pan. The crust had hardened enough that the towel had not stuck to the loaf. Making the best of a poor situation, I increased the heat to 350° F and baked the loaf for another 40 minutes. I think that if I had followed the original baking times I would have gotten another inch or two of lift in the final produce. However, it turned out beautifully, so I and my family were quite satisfied.

Tip: Tent the loaf with aluminum foil, if the crust appears to be browning too quickly.

Note: Use an instant read thermometer and remove the panettone when the internal temperature reaches 190-195° F. The crust should be a deep brown when done, and it should sound hollow when tapped.

21. Remove the panettone from the oven and run a knife blade around the edges of the pan.

Tip: This insures that the loaf is not stuck to the sides of the pan when you try to remove it.

22. Tilt the loaf out onto a wire rack and then set it upright.

23. Cool the panettone completely and then slice into wedges.

Tip: Store at room temperature, well-wrapped, for up to a week; freeze for longer storage.

One response to “Karl’s Panettone”