This meal started with my wife Jan noticing that I had a ripe avocado on the counter. “We should have tacos, hmm, grilled shrimp tacos,” says she. I know that she is also very fond of grilled corn, so I suggested grilled corn salsa to go with the tacos. Thus a meal was born. 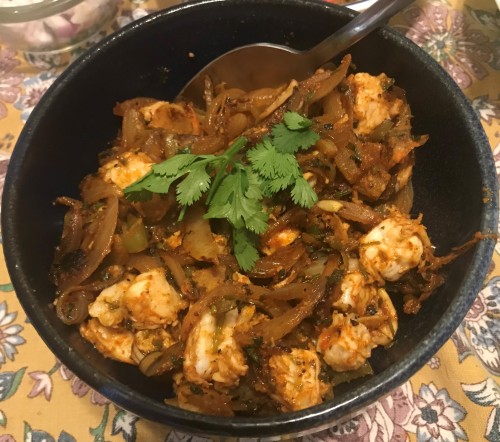 After Dinner Note: Jan is on the Noom program and—as she was logging the meal—she found that the Noom app was very happy with both the tacos and salsa—all “green” and “yellow” foods. Even the grilled shrimp was a green food. The only yellow foods in the meal were the tortillas and the guacamole.

Tip: While it is better to leave the shells on when you grill shrimp, I am planning to marinate them as well and I did not want the flavor to be removed with the shells.

2. About 30 minutes before cooking put the shrimp, put the lime juice, chili powder, zest, salt, and garlic into a medium bowl.

3. Add the whole shrimp to the marinade, toss to coat, cover, and refrigerate.

Tip: Toss the shrimp again every 5-10 minutes to redistribute the marinade.

Note: Do not marinate the shrimp more than 30 minutes. The lime juice “cooks” the shrimp, but if you marinate them too long the surface might get mushy and not sear well.

Tip: You will be adding the marinade to moisten the taco filling as it cooks.

5. Blot the shrimp lightly with paper towels and let them air dry for 10 minutes.

Tip: The point here is not to squeeze out all of the lime juice; it is just to get the surface of the shrimp dry enough to sear well when you are grilling it.

6. While the shrimp is marinating prepare the rest of your filling ingredients.

Tip: Sliced the onion thinly pole to pole. Cut the pepper into quarters lengthwise and slice the pieces into 1x⅛ inch bars. Coarsely chop the leafy parts of the cilantro—half of this will be reserved to serve on the side at the tables and the other half goes into the salsa. Minch the stems of the cilantro finely—this will be cooked with the rest of the filling ingredients.

Note: Most of the year, I would have made this dish with yellow onions. However, sweet Vidalia onions are in season and I thought their mildness and sweetness would complement the flavor of the shrimp.

7. String the shrimp on bamboo skewers and grill directly over the flames for 5-6 minutes per side.

Tip: Do not overcook—the shrimp should only half cooked at this point. When you reheat the shrimp with the rest of the filling you do not want them to turn rubbery.

8. Add the corn oil to a skillet and heat on high until the oil just starts to smoke.

9. Sauté the onions and peppers to the skillet, cook until soft, about 3-5 minutes.

10. Pull the vegetables to the sides of the pan and sauté the garlic until fragrant, about one minute.

11. Add the chili powder and cilantro stems, cook for one minute more.

Tip: Turn the burner to low to keep the filling warm while you finish prepping the shrimp and toppings. Wrap the tortillas in paper towels and microwave them for one minute. Unwrap them, peel them apart, so that they do not cool into a solid mass, rewrap them to keep them warm. Before adding the shrimp is also a good time to finish making the salsa and guacamole.

12. Cut the cooled shrimp into half inch pieces and add them with the remaining marinade to the onions and peppers.

Tip: One you add the shrimp to the filling you will want to serve it immediately, so that the shrimp do not overcook.

Note: When my wife saw me cutting up the shrimp she said, “I would have left them whole.” I explained to her that if they were whole you would get one or two bites of the taco with shrimp and the rest would be only onions and peppers. By dicing up the shrimp every bite has some shrimp in it.

13. Cook the filling for another minute to evaporate the marinade and to warm the shrimp through.

14. Serve it immediately with the tortillas and toppings.