I had started to think about the dreaded “What am I going to make for dinner?” question. I was thinking I could make some fried fish with lemon rice and green beans—this would require me to make a quick run to the store. Then my daughter informed me—at the last minute as usual—that she was going out with her friends. Shifting gears, I started to think about what I could make with just what I had on hand. 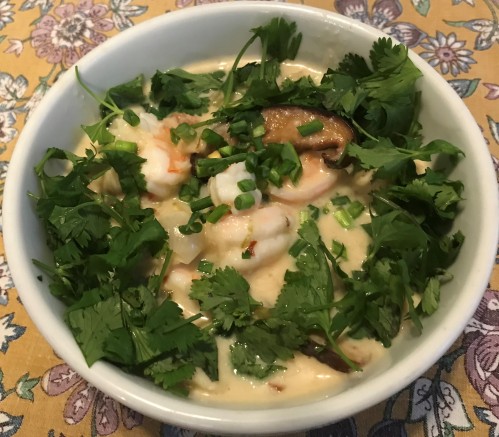 My wife Jan decided that she wanted a soup—she was having a bit of a sore throat and she thought that the warm liquid would help. She went out to the garden and brought in some spring onions and a small bell pepper to add to the pot. This was a start, but what else did I have on hand and what kind of soup should I make?

Note: There is a story behind the onions. My wife bought a package of seeds labeled “scallions.” Scallions are exactly the same thing as green onions—long tender leaves and a white part with no bulb.  What she brought me had the long leaves, but also had distinctive bulbs at the end—this is the defining difference between green onions/scallions and “spring onions.” However, as my father often pointed out, “A distinction that makes no difference is no distinction.”

Since I already had some fish defrosting, Jan suggested a Caribbean fish soup. Glancing at a few recipes—none of which I really found appealing—I gathered a few ideas about want makes a soup “Caribbean.” The key elements seemes to be coconut milk, lime, and chili. Searching my pantry, I had the coconut milk, fresh limes and—while I did not have a Scotch bonnet pepper, the favored chili in Caribbean cuisine—I did have chili flakes.

Note: Caribbean cuisine is more of a catch-all term. Just about every island in the Caribbean has its own cuisine—with different European and world influences, depending on that island’s unique history. While the ingredients may be similar, how they are used may differ quite widely—from the fiery Jamaican dishes to the much more mild dishes of Nevis.

Searching my supplies, a found a few shrimp and scallops—not enough for a meal in themselves—but enough to add substance to the cod that I already had defrosting. I also decided to add a stalk of celery, a slice of Vidalia onion, a bit of leftover tomato, fresh ginger, and of course some garlic. Since daughter Eilene was not joining us, I threw in a large shiitake mushroom. For the broth, I had the can of coconut milk, but that would have made a fairly dry soup, but I did not want to just add more water. Given my other ingredients, I decided that a shrimp broth would be the thing to use. Fortunately, one item I always keep in my pantry is Consome de Cameron—a very quick and tasty shrimp stock.

After Dinner Note: This soup was really, really good.

1. Cut the cod into small bite sized pieces and set them aside.

Tip: I keep a set of blue plastic bowls as prep bowls to keep my ingredients separate and ready to toss into my dishes.

2. Peel the shrimp—if necessary—and cut them in half.

Tip: The shrimp and scallops may be kept in the same prep bowl.

3. Slice the mushroom and garlic and keep separately.

4. Prepare and set aside the other ingredients, as necessary.

Tip: Cut the white parts of the spring onions into chunks and finely slice the green leaves. Keep about half of the green parts separate to use as a garnish after you serve the soup.

Note: Do not chop the cilantro at this point. You will be using it as a garnish as well and it will start to brown along the cut edges if you cut it too soon.

5. Bring water to a boil and put 1½ cups into a measuring cup.

6. Stir in the shrimp bouillon and set the broth aside.

7. Put the butter and oil in a soup pot over a medium high heat.

Tip: I like the flavor that butter add to my dishes, but my wife like me to reduce this Noom “red food.” Olive oil is a “red food” also, but not as bad as butter. Mushrooms however need at least some oil in the pan to fry properly.

8. Add the mushroom slices to the pot in a single layer and fry for 2-3 minutes—until well browned on the bottom.

9. Stir the onions—both the Vidalia and white parts of the spring onion—and celery into the mushrooms.

Tip: Try to flip most of the mushrooms over to the second side while you are stirring in the other vegetables.

10. Sauté the vegetables for 2-3 minutes until they have softened.

11. Pull the vegetables to the sides of the pot and sauté the garlic in the hole in the center until fragrant, about one minute.

12. Stir in the bell pepper and tomato and continue sautéing for two more minutes.

14. Simmer the soup until it starts to thicken, about 3-4 minutes.

15. Stir in the shrimp and scallops to the pot.

16. Simmer the soup for another 3 minutes.

Tip: Use this time to chop the cilantro.

17. Add as much rice to the bowl as your individual diner wishes.

Tip: In our house, Jan prefers brown rice, but Eilene and I prefer white rice. By adding the starch at the very end everyone gets what they want and the rice does not get overcooked and soggy.

18 .Serve the soup to individual bowls.

19. Garnish the soup with the green onion tops and cilantro.