I planned to have a variation of lamb Rogan Josh for this Sunday’s dinner with the kids. A saucy meat dish calls for bread to sop it up. In an Indian feast this means naan. 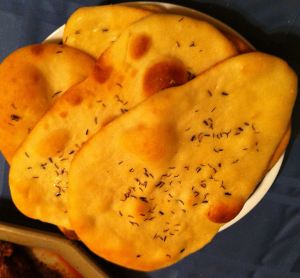 Nān is the Persian word for bread, but it covers a wide variety of baked goods. As the idea spread to other countries, each cook adapted the recipe to their own taste and needs. An Indian naan is very different from an Afghan nann and also from a Uyghur naan.

Naan is a leavened bread. It may be leavened with baking powder or with yeast. Which you choose depends on how much time you have for making the bread. Yeasted breads take several hours just to rise, whereas baking powder breads can be ready to eat in an hour and a half.

I have been making a lot of bread lately. The primary difference between a simple Indian naan and Cherokee fry bread is where the oil is introduced. In the fry bread the dough is deep fried in hot oil and in Indian naan the oil is mixed into the dough and then the bread is dry baked in a super-hot oven.

a pizza stone or a large smooth cast iron griddle
a peel or a thin, lipless, cookie sheet

1. Mix the dry ingredients well in a large bowl.

2. Warm the milk and stir the oil into it.

Tip: You do not want the milk to be hot or boiled, but it should not be cold from the refrigerator.

3. Make a “well” in  the dry ingredients and pour in the milk/oil mixture

4. Stir the wet ingredients into the dry until it forms a soft dough.

5. Turn the dough out onto a floured board and knead the dough for 8-10 minutes, until the dough is smooth and elastic.

Tip: Add as little flour during the kneading as you can manage. The oil in the dough actually makes the dough less sticky, so this is not difficult.

6. Form the dough into a ball and divide it into 6-8 wedges.

Tip: How many wedges you cut depends on your number of diners and how thick you want your naan to be.

7. Form each piece of dough into a small ball.

Tip: Hold the dough piece so that the cut edges and point is up. Press the point down into the dough with your thumbs. At the same time, pull the smooth edges—the part that was the outside of the original dough ball— up and around the cuts in the bread. Pinch the smooth edges together and give them  a twist. This prevents the leavening gases from escaping while the bread cooks.

Tip: A pizza stone is very useful at this point, but if you do not have one a large smooth cast iron griddle will work. The idea is that you want a super-hot, flat surface to lay your breads on when you put them in the oven.

9. Roll each piece of dough out on a floured board into a tear drop shape about 4 by 7 inches.

Tip: For eight pieces of dough this will be about an eighth of an inch thick. For 6 pieces it will be slightly thicker.

10. Sprinkle a bit of black cumin over the breads and give them one last roll with a rolling pin to press them into the dough.

11. For each naan, sprinkle a pinch of corn meal over the peel and lay the bread on top of it.

Tip: The cornmeal prevents the breads from sticking to the peal when you are putting the naan into the oven or to the baking stone when you are trying to take them out.

Note: I do not own a peel, a large tool just to take bread in and out of the oven does not suit my small kitchen. I have two thin steel cooking sheets that I use instead. With breads this size, I was able to cook two naan at a time.

12. Slide the naan off the peel and onto the cooking surface and quickly close the oven.

Tip: Hold the peel over the stone and pull back with a sudden jerking motion. The bread should just slip off the peel.

Note: The advantage of a real peel is that it has a handle that keeps your hands well away from the super-hot oven. The slightest brush against any part of the ovens interior is an instant second degree burn.

13. Without opening the oven, let the bread bake for 3-4 minutes.

Tip: How long you bake each of your breads depends on the exact heat of your oven and the thickness of your naan. Adjust your baking time after you have cooked your first one. The bread should be spotty brown and still soft, not dark brown and crisp.

14. Remove the naan from the oven with the peel and transfer them to a wire rack.

15. While they are still hot, brush the tops lightly with melted butter.

One response to “Karl’s Indian Naan”