Last week Jan asked for bouillabaisse for her birthday dinner. As I was looking up recipes, I realized that she was using this term in the sloppy American way we do as a generic word for fish stew. Bouillabaisse is a Provençal fish stew from Marseille that is made with specific fish, cooked in a specific order and served with a rouille, a mayonnaise sauce that Jan would not touch. What Jan was really asking for was cioppino. 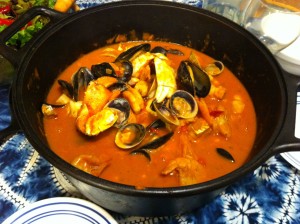 Cioppino is a much more relaxed Californian Italian-American soup. The ingredient list is much more “What is fresh today?” with fresh tomatoes and a wine-based soup.  The common seafood for this soup is a combination of Dungeness crab, clams, shrimp, scallops, squid, mussels and fish. Jan is extremely fond of California mussels and Dungeness crab also has a deep meaning for her.

In the past when I have made this soup I have used a bottle of Barilla Sweet Peppers sauce. Besides the questionable politics of continuing to use Barilla products, I have found that making my own sweet pepper sauce is worth the extra effort. I am planning to adapt the soup base I used last week for the Italian meatball soup for my cioppino.

In my experience the broth for cioppino is thinner than the soup I made last week. I am reducing the vegetables because this soup is more about the fish. I am also leaving out the beans that I used to make the soup thick. The starch for this meal comes from crusty bread on the side, which is also useful for sopping up the broth.

This is a wine based soup. Wine and some clam juice will replace the chicken stock from last week’s recipe. I am going to increase the anchovy paste, because this soup is supposed to taste fish-y. Finally, in addition to the crab and mussels the selection of seafood will depend on what I can find fresh on Sunday.

1. Cut the peppers in half, seed and de-vein them.

2. Slice the tomatoes in half and cut out the tough part by the stem. Finely dice and reserve 1 half of one of the tomatoes.

Tip: This half of a tomato will be added near the end of cooking to get that fresh tomato flavor.

4. Arrange the vegetables on a lipped baking tray, Peppers skin side up and the tomatoes and fennel cut side up. Brush then all lightly with olive oil.

5. Broil the vegetables for 20-30 minutes, until well charred.

6. Remove and cool the vegetables slightly.

Tip: Remove the peppers to a plastic bag and seal it. This will steam the peppers and make it easier to remove the tough skins.

7. When cool enough to handle skin the peppers and coarsely chop the peppers, tomatoes and fennel. Reserve the vegetables for later.

Tip: If you do not like tomato seeds you may remove the seeds. If you do, press the jelly that surrounds them through a sieve and return it to the bowl.

8. Add the olive oil to a soup pot and sauté the ¾ of the onions until just picking up some color, about 5 minutes.

10. Add ¾ of the garlic and cook for one minute more, until fragrant.

Tip: Reserve ¼ of the garlic to add later.

11. Add the clam juice, peppers, fennel, lemon thyme, oregano, pepper, tomato paste and anchovy paste to the pot. Bring to a boil and then cover and reduce the heat. Simmer for 10 to 15 minutes.

12. Remove the pot from the heat, add 1 cup of white wine, and let the soup cool. When it is cool enough to handle process the soup in a blender until smooth.

Tip: You may need to do this in batches.

13. Rinse the blender out with a half cup of white wine and return the soup to the pot.

14. Add the rest of the onions and garlic, the celery, and the cayenne pepper. Simmer for five minutes.

14. While the soup is simmering steam the mussels and clams in a small pot with ½ cup of white wine.

Tip: Discard any that fail to open.

15. Remove one shell from each of the clams and mussels and reserve.

16. Strain the steaming liquid and add it to the pot.

Tip: If the meat has separated completely from the shell, discard the entire shell.

17. Cut the fish into bite sized pieces. Add them to the soup.

18. After two minutes, add the shrimp, scallops, and calamari.

19. After two more minutes, add the clams, mussels, and crab.

Tip: If the ratio of liquid to seafood seems off, you may add more wine or clam juice.

20. Serve from the pot or a large tureen with crusty bread and a salad.

Tip: I make the initial broth in a light, deep soup pot. For the second cooking, I use a wide and very heavy Dutch oven, which makes for a more attractive display at the table.