The recipe on my blog that has gotten the most views is my Moroccan oxtail tajine. While this dish was very tasty, it was way too fatty for Jan. Jan had her gall bladder removed while we were in China and she is in the 10% of the population that has difficulty digesting fats after that operation. 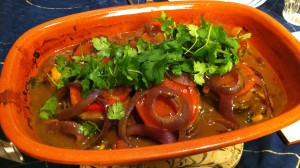 My original thought was to make this Moroccan dish again, using a lean cut of stewing beef. While she was willing to let me do this, she obviously was not looking forward to it. I decided to replace the beef with chicken, a meat that she prefers.

My son-in-law, Chris, is still on his ketogenic diet. As I read over the original recipe I realized I would have to make more changes than just the meat. With his diet he will not eat starches or fruit, so the lentils and apricots would have to be cooked separately from the tajine. To keep everyone happy I am going to have to deconstruct the original recipe into two: a meat and vegetable tajine and a starch and fruit pilaf.

Note: When I made this recipe with oxtails I used a large Dutch oven. Partly this was because I do not own a tajine, but mainly as it was the most appropriate pot that would hold all of the ingredients. This time I am using chicken and moving the fruit and lentils to a different dish. With the smaller volume of ingredients I plan to use my Romertopf clay pot. This pot will have a cooking environment that is closer to that of a tajine.  One significant difference is that the cooking liquid does not escape from these clay pots the way that it does from the Dutch oven. With the juices that come out of the chicken and vegetables you do not need to add as much extra liquid.

Note: If you are using a Dutch oven you may need an extra cup of broth. The Dutch oven does not trap in the steam as well as clay pots or tajines.

1. Chop one of the onions in a large dice and set it aside.

2. Peel, seed and chop one of the tomatoes and set it aside.

3. Take the bunch of cilantro and in one cut remove most of the leafy tops (you want about half a cup of the tops, but do not chop them at this time). Put the tops on a bowl of cool water to keep them fresh. Mince the cilantro stems very finely and set them aside.

3. Pare the artichokes down to just the caps; remove the leaves, stem and choke.

Tip: Reserve the leaves and stems for a dip or other dish.

Note: As easy as 1 – 2 – 3. 1) Remove and trim the stem, the tough outer leaves and the top 1/3 of the leaves. 2) Trim just the darkest green around the base of the cap and the leaves down to where they are completely yellow and tender. 3) Score the artichoke with a knife just above the cap and it will separate easily. Scrape the choke out of the cap and the tender leaves with a spoon.

4. Put the artichoke caps and the leaves you intend to use in a bowl of water with a little lemon juice will keep them from turning brown.

5. Slice the remaining onion and tomato into rings.

Tip: you want as many slices of tomato as you have artichoke bases.

Tip: Legs, thighs, wing tip with a bit of breast, and the rest of the breast cut into three equal pieces.

7. Sprinkle half of the salt on the chicken and brown the pieces lightly in the butter.

Note: If I had a real tajine I could do this in the base of the pot. Since I am using a clay pot, after I brown the meat in a skillet, I removed it and set it aside on a plate until the sauce base is ready. If you are using a clay pot, remember to soak it in water for 15 minutes.

8. Without cleaning the skillet, sprinkle the rest of the salt on the onions and add them to the pan. Sauté them until they are just starting to pick up some color.

9. Add the cloves of garlic and sauté 2 minutes more.

Tip: Lightly crushed means to break the clove open, but to leave them in one piece.

10. Pull the vegetables to the edges of the pan and add the spice mix to the hole in the center. Heat the spices for 20 seconds and then mix it into the onions and garlic.

11. Add the diced tomatoes, cilantro stems, ginger and 1 cup of chicken broth to the pot and cook on medium heat for 5 minutes.

12. Arrange the chicken pieces neatly in the clay pot and spoon the sauce over the meat.

Tip: Be sure to soak the clay pot in water for 15 minutes before putting in the chicken.

14. Remove the pot from the oven and arrange the artichokes attractively over the stew, cup side up.

15. Lay the tomato slices on top of each artichoke.

16. Separate the onion in to rings and scatter them across the stew.

17. Spoon some of the sauce over the vegetables, but do not stir the pot.

18. Use a turkey baster to remove about ¾ of the liquid to a small pot. Boil this to reduce the volume by half.

19. Re-cover the pot and continue baking for 30 minutes.

20. After 15 minutes, open the pot and spoon some more of the sauce over the vegetables. Do Not Stir! Recover and continue baking.

21. Remove the lid from the clay pot and use the baster to transfer most of the liquid to the small pot. Continue reducing this liquid.

Tip: You may add some arrowroot or corn starch mixed with water to thicken the pan sauce.

22. Return the clay pot to the oven and bake for 10 more minutes, uncovered, to brown the chicken.

24. Pour the pan sauce over all and scatter the cilantro over the stew just before presenting the clay pot to the table.

25. Serve with Karl’s Moroccan Quince and Green Lentil Pilaf on the side.

Note: Moroccan Mint tea would be an appropriate drink to go with this meal.