Jan has had oral surgery, so she is still eating only cool blended foods at the moment. By now she is getting tired of smoothies, so I thought I would make her some vichyssoise. This is a fancy name for a potato and leek soup that can be served either hot or cold. 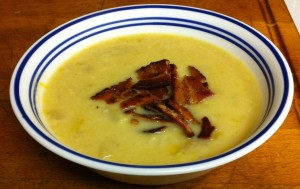 I have used this soup as the base for several different soups. I have added chicken “Chickyssoise,” and seafood “Fishyssoise.” Jan requested that I add just scallops to this one and then blend it perfectly smooth and cool it for her.

While that would be good for Jan, I thought that Eilene would want something warmer and with more texture. In the past Jan and I have had bacon wrapped scallops as hors d’oeuvres. This is a very good flavor combination. While Jan could not handle the jagged edges of the bacon, and she doesn’t really like bacon anyway, Eilene would love it.

My solution was to make the Fishyssoise and then divide the soup into two portions. Half I blended smooth and the other half I only blended enough to thicken the soup. I then provided crispy bacon on the side to put into our soups.

Note: While I actually divided the soup in to two different soups, I have written the recipe assuming that anyone making it would only make the soup that Eilene and I ate.

1. Fry the bacon crispy and break the strips into small bits. Reserve until later.

Tip: I do not own a bacon press, but I find that a heavy flat lid is just as good. It keeps the bacon flan and it cooks more evenly so that you do not end up with flabby undercooked spots in your crispy bacon bits.

2. Prep the vegetables. Trim and chop the onion and leeks. Peel and dice the potatoes.

Tip: If you wish, you may use the entire leek. Also, if you like a rustic soup, you may leave the peel on the potato.

3. In a large soup pot, melt the butter and sauté the onions with the salt over medium heat until translucent.

Tip: You do not want your onions to brown for this dish.

6. Add the chicken broth and potatoes to the pot and bring it to a boil. Reduce the heat and simmer, covered, for 20 to 30 minutes.

Tip: I have tried many different types of potatoes in this dish. I find that the Russets work best, because they are already starting to break apart when you are ready to blend them. Also the waxier potatoes (like red and white) get a bit gluey if you blend them too much.

7. When the potatoes are starting to break apart, blend the soup.

Tip: For a smooth soup use a standing blender and process the mixture in batches. I prefer to use an immersion blender and only partially process the soup. The remaining chunks of potato and leeks give the soup a more interesting texture.

8. If necessary return the soup to the pot.  Add the scallops, pepper, and mace (optional). Heat the soup for five to ten minutes more to finish cooking the scallops and meld the flavors.

Tip: The mace is optional. Also, if you do not have mace on hand, a grating of fresh nutmeg is nice.

9. Stir in the cream and serve with the bacon bits on the side.

Tip: I add very little cream to my soup, because of Jan’s dietary restrictions. People without this restriction may choose to replace some of the chicken broth with cream. If you do this, do not let the soup come to a boil after adding the cream.

One response to “Karl’s Scallop Soup with Bacon”