Before I left home for the first time, I sat down with my mother’s recipe box and wrote down my favorite dishes. One of the dishes I copied was Cherokee Fry Bread. The name she called it is not politically correct, but those were the times. 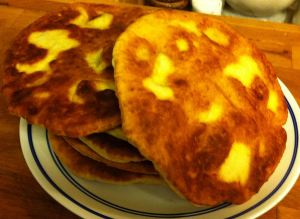 The Native Americans had been making bread from whatever grain seeds were in their area long before the Europeans arrived. However, when they introduced wheat, each tribe soon created their own fry bread recipe.  The Manataka site gives a selection of possible variations. My mother’s recipe is nearly identical to the one I found there for Cherokee fry bread—she used a quarter cup less milk.

Note: I found that using the ¾ of a cup of liquid suggested by the website makes more of a batter, rather than a dough.

Note on Shapes and Fats: If you are making this bread traditionally you cut the dough into strips and deep fry it in about an inch of lard—my mother used bacon grease, if she had enough. Because of Jan’s difficulty with fats, I roll the dough into a pancake and I use only enough oil to slick the skillet. I cut a slit in the middle of the disk, so that the dough lays flat while frying. Mine breads come out much more like (East) Indian naan.

2. Add the milk/water to the dry ingredients to make soft dough.

3. Roll the dough out on a floured board to ¼ inch thick.

6. Turn immediately and cook until browned on both sides.