I love Japanese pickled vegetables and I frequently get the urge to make them. The day before my Sunday dinner I started to make a bunch. Sometimes the side dishes lead you to the main dish, rather than the other way around. 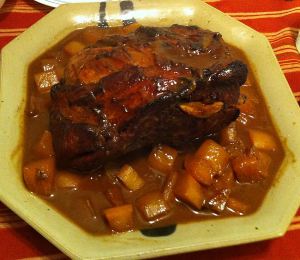 The question became, “What do I serve with all of these pickles?” One of the food trucks that come around our neighborhood—the Chairman—serves a Coca-Cola® braised pork with pickled vegetables. We really like it and I decided that I would try my hand at making something like it with a Japanese twist.

Looking at on-line recipes for Japanese braised pork and Coca Cola pork recipes, I explored the range of ingredients and techniques. I wanted the flavor to be both delicately Japanese and distinctively cola. Strong flavors and heavy seasonings—like the garlic and oregano of other recipes—were right out. I finally decided on only a few ingredients.

Negi—Welsh onions—look and smell very similar to spring onions, but they are about 2 feet long.  Their flavor is more delicate than European leeks. If you do not have a handy Japanese store nearby they may be hard to find. You may replace this ingredient with leeks or green onions, but the flavors will be stronger.

Besides the Coco-Cola, I added a bit of soy sauce and saki to my braising liquid. To round out the Japanese flavors  I added ginger and a few Japanese chilies. I wanted it to be simple, not tasteless.

I planned to serve brown rice with this pork, but some of my diners are avoiding starch. I decided to add some daikon for them. If you wish, you could easily replace the daikon with potatoes and still be in the spirit of the dish.

After Dinner Note: Five diners easily polished off two pounds of this at one sitting. Eilene’s comment was that it was “meat butter,” because it melted in your mouth.

1. Sprinkle salt all over the pork shoulder and wrap it will in plastic wrap. Let it sit for at least one hour.

Tip: Do not cut apart or punch holes in the meat, you do not want all of the juices leaking out of the roast.

2. Trim, split the negi in half lengthwise, and chop it into one inch pieces. Set them aside.

3. On the stove top, heat the oil in a large Dutch oven, until shimmering, and brown the pork well on all sides, about 8 minutes per side.

Tip: Be careful not to burn the crust—despite Jan’s beliefs—charcoal is not a flavoring to be encouraged.

4. Remove the meat from the Dutch oven and deglaze the bottom with a splash of water.

5. When the water has almost evaporated, add the nigi and sauté until well wilted and starting to pick up some color.

7. Add the Coke Classic, soy sauce, and ginger to the pot.

Tip: Scrape the bottom to make sure nothing is sticking that might burn later.

8. Tear the chilies in half and add them to the pot.

Tip: Depending on how hot you like your food, you may discard some or all of the chili seeds. The seeds are where most of the “heat” of the chilies reside.

9. Return the pork to the pot and add enough saki to bring the liquid level half way up the sides of the roast.

10. Bring the pot to a boil, and spoon the liquid over the roast.

12. Leave the Dutch oven undisturbed for one hour.

13. Turn the roast over, stir the liquid, and spoon it over the roast. Recover and continue cooking for a second hour.

14. Transfer the pork to a plate and put the braising liquid into a standing blender.

Tip: Rinse out the pot with a splash of saki to remove most of the sauce from the bottoms of the pot. This prevents any residue from burning and “smoking” the meat with a burned flavor.

Note: If you do not want the dish to be too spicy, fish out the chilies and ginger coins at this point and discard them.

15. Return the pork to the Dutch oven, cover, and return it to the oven. Continue baking the pork for a third hour.

16. Blend the sauce until very smooth and strain out any large bits.

17. Transfer the sauce to a pot and simmer on medium high to reduce the volume by half.

18. Add the daikon to the sauce and simmer until fully cooked, about 20 minutes.

19. If the sauce is not thick enough you may add some corn starch until it reaches your desired thickness.

20 Transfer the pork to a serving platter and arrange the daikon around it. Spoon the sauce over the meat and serve.

Tip: Serve any extra sauce on the side for your diners to add as they wish.