Jan has a friend who is getting oral surgery and will have a week where she will not be able to chew. My brother-in-law and his family are also coming to the Bay Area and they all have troubles with their teeth. Soft soups are the order of the day and I decided to make three soups that I have made before: Ezo Gelin, Maafe, and Avgolemono. Half I will give to Jan’s friend as a mitzvah and we will have a soup tasting for the family with the rest. 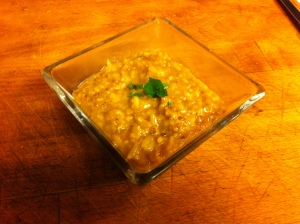 Ezo galin soup is a Turkish dish that comes with its own mythology. I was attracted to this recipe because Jan had oral surgery and she could not eat solid food.  Today I have a whole group of people with the same restriction. Cooked bulgur, lentils, and rice seemed like just the ticket for a dish that was soft, but not blended into baby food. The rustic texture, not just the ingredients, are what that make this soup distinctive.

When I first made this as a mostly vegetarian dish Jan really liked it. Eilene and I felt that it was lacking something to be a complete meal—meat. For those who would be living on only what they could slurp, I decided that this dish needed more protein. I added some ground beef that I first cooked well and then blended finely.

I stayed fairly close to the traditional recipes and adjusted the quantities to my liking and to the number of my diners. I did not have sweet red pepper paste, so I roasted half of a red pepper, removed the skin and blended it with a bit of water. I cooked it with the onions and some tomato paste to enhance the umami. With the addition of the ground beef it became a rich and beefy soup.

Jan’s family does not like it too spicy, so I replace the chili flacks with black pepper. The chef’s at Cook’s Illustrated found that using strait beef broth may cause a dish to taste slightly sour. With this in mind I replaced half of the beef broth with chicken broth.

Note: I did not make any of these three  soups the same way I made the originals. I added protean or processed the meats to not require chewing. Here are links to the other two soups I made this time: Maafe, and Avgolemono.

1. Roast half a seeded sweet red pepper. Remove the skin and blend with two tablespoons of water. Reserve the puree until later.

2. In a large soup pot, melt one tablespoon of butter and brown the ground beef well.

Note: For my guest with chewing problems, I then processed the cooked hamburger in a standing blender. You may prefer to keep the meat chunks intact.

3. Deglaze the pot with the rest of the butter and sauté the onions with the salt until translucent.

4. Pull the onions to the sides of the pot to create a hole in the center. Add the garlic and sauté until fragrant, about one minute.

Note: Many of the on-line recipes for this dish do not include garlic. I cannot imagine cooking without it.

5. Add the red pepper puree and tomato paste. Cook until all of the liquid has cooked off and the pastes have darkened well, about 2-3 minutes.

Tip: Stir the rest of the vegetables into the cooking pastes.

Tip: Do not skip cooking the flour. It removes the raw flour taste and prevents the flour from turning into doughy lumps when you add the liquid.

7. Add the lentils, rice, bulghar, pepper, and liquids to the pot and stir to mix.

8. Bring the pot to a boil, reduce the heat and then cover the pot. Simmer for 20-30 minutes until the rice is fully cooked.

9. Serve garnished with the parsley.