Miriam has requested a Spanish style seafood stew for this Sunday’s dinner. What she meant was something like a cioppino with Spanish chorizo. A problem here is that she and her husband, Chris, are on the low-carb Adkin’s Diet. 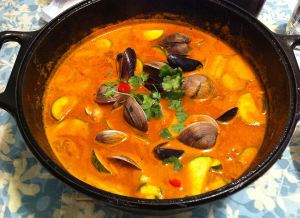 In almost all of the Spanish stews the seafood is “stretched” with the addition of some kind of starch—bread, beans, noodles, peas, or potatoes, etc. I decided that what I wanted to do was to make something like a paella mixta, using chicken to stretch the seafood.  I would put the rice on the side, for the starch eaters.

The Spanish stew that is closest to this idea is the Catalonian zarzuela (“the operetta,” not to be confused with their other, musical zarzuela). Multiple types of seafood singing in harmony. I thought I could make this in the same way that some paella mix seafood and meats. I only found a few references to zarzuela mixta on Spanish language sites—and they only seemed to be talking about mixing different types of fish.Giving up the idea of trying to make this an authentically Catalonian zarsuela, I am going to do what feels right to me.

Note: Since the kids are off starches, I am packing as much vegetable matter to this dish as I can fit in—another non-traditional addition.

As far as cooking techniques go, I will be using some that that I have picked up recently that are definitely non-Spanish traditional. I do not own a Spanish Cataplana—a copper clamshell pot—and I won’t be using my paella pan—since I am tossing the rice out of this dish, it is not going to be a paella mixta. In the end, I decided to use my largest cast iron Dutch oven, my pot of choice for large stews.

One technique I will not be changing is the sofrito.  This sauce base, of onions, garlic, and tomatoes slow sautéed in olive oil, is the starting point of most Spanish stews—as well as Portuguese, and with variations: Brazilian and other Spanish influenced countries.  Without the sofrito it would not be a zarzuela.

After Dinner Note: I made a rice dish, for the starch eaters, and Jan made a sugarless flan for this dinner, however both of these dishes need more work before being posted.

1. Peel the shrimp and add shells to a medium pot with ½ cup of water or Spanish white wine and ½ cup dry sherry.

2. Add clam juice and bring the pot to a boil. Reduce heat, cover and simmer for 10 minutes, until the shrimp shells turn pink. Strain out the solids and reserve.

Tip: Reserve the raw shrimp in a covered bowl in the refrigerator.

Note: Discard the shells and reserve the liquid in the refrigerator. You may keep the broth in the pot as you will be using both the pot and broth again later.

3. Toast and grind the saffron to a powder and add it to the warm shrimp/clam broth.

Tip: You will be using this pot again later, so keep the shrimp broth in the same pot.

4. Cut two of the red bell peppers in half and remove the veins and seeds.

Note: The third bell pepper is reserved to add at the end of cooking.

5. Broil the halves, two inches from the heating element, for 10-15 minutes and then put them in a plastic bag.

Tip: This steams the peppers and make the skins easier to remove.

8. Blanch the tomatoes in a pot of boiling water for one minute.

9. Cool and remove the skins.

10. Cut the tomatoes along the equator and remove the seeds to a sieve placed over a medium bowl.

11. Press the jelly through the sieve and discard the seeds.

12. Coarsely chop the tomatoes and put them in the bowl with the jelly. Reserve.

13. Add the olive oil to Dutch oven and sauté the chorizo for a few minutes, until well browned.  Remove the sausage to the bowl of roasted red peppers and set aside.

14. Fry the chicken wings until well browned and reserve with the chorizo.

15. Lightly stir fry the celery. Remove and reserve with the chorizo.

16. Add the onions and salt to pot and sauté at medium high heat for 10 minutes, until starting to brown.

Tip: Use the moisture released by the onions to deglaze the pot. You may also add a splash of sherry, if that is not enough.

17. Pull the onions to the sides of the pot and add the garlic and diced red hot pepper. Continue cooking for 2 more minutes.

18. Add the tomato, paprika, and oregano to the onion mix, reduce the heat to medium and continue cooking for at least 10-20 minutes, stirring frequently to preventing the sofrito from sticking and scorching.

Tip: If necessary, add a little Spanish white wine or sherry to places where the sofrito is sticking, so that it will not burn.

19. When the sofrito has darkened, remove it to a standing blender and add one cup of the fish stock.

Note: Do not use the shrimp/clam broth to the pot at this time!

20. Process until smooth and return the sofrito to the pot.

Tip: Use some more of the fish stock to rinse out the blender jar.

21. Add the roasted red peppers, chorizo, chicken, and celery to the pot and stir in remaining fish stock.

Note: I am using one cup of a 32 oz. container of fish stock for my rice.

22. Add the swordfish, cod, and rock fish to the pot and bring the pot to a boil. Cover and simmer for 10 minutes.

23. While the soup is simmering, add the shellfish to the pot of reserved shrimp/clam broth and bring it to a boil.

24. Recude the heat, cover and simmer until all of the shellfish haveopened, about 8-10 minutes.

Tip: Discard any shells that have failed to open.

25. Transfer the shell fish to the Dutch oven.

Tip: If you wish to reduce the volume of the shell fish, you can tear away one side of each shell at this time.

26. Strain the shrimp/clam broth, through a fine meshed sieve, into the Dutch oven.

27. Stir in the shrimp, calamari and the zucchini.

28. Remove the pot from the heat, cover the pot, and let the Zarzuela rest for 10 minutes.

Tip: The heat of the pot, will cook, but not overcook, the shrimp and calamari.

Note: If you are not going to serve the stew in the same pot that you are cooking it in, now is the time to transfer it to a tureen.

29. Garnish with the reserved (raw) red bell peppers and the fresh cilantro or parsley.

20. Serve the zarsuela in the Dutch oven, with lemon wedges on the side.