Several day ago, a friend of Jan’s (Jennifer Anderson) gave her three yuzu to pass on to me. Yuzu’s flavor is describes as a cross between a grapefruit and a mandarin orange. They are the size of small oranges, but not particularly juicy—the three yuzu produced ⅓ of a cup of juice. This sour fruit juice is the key ingredient in authentic Japanese ponzu sauce. 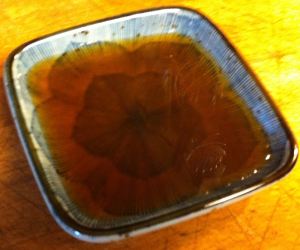 Note: My followers may have noticed that I have not posted recently. It is not because I have stopped cooking and creating new dishes, but that I am too buzy to write up and share them. The first week of December I always spend making 25 jars of orange marmalade, biscotti1, biscotti2 and Christmas cookies to give away to family and friends. This year, I also made 11 jars of lemon marmalade.

Looking on-line I found many Japanese recipes that called for ponzu sauce or even just the zest of the yuzu.  I decided that I would go for a more fusion approach and make a ponzu salmon teriyaki and yuzu pickled cucumbers. There was way too much left of the flavorful yuzu rinds to use in one meal and it seemed like a crime to just throw them away. I decided the only solution was to prep the skins and freeze them for later use.

1. Slice the fruit at the equator and juice the yuzu. Set it aside for later.

Tip: Cut a strip of the rind and remove the white pith and reserve for the sauce.

Note: Reserve the rest of the skins for later use (see below).

2. Place the mirin, vinegar, soy sauce, bonito flakes, kombu , and rind into a small pot and bring it just to a low boil.

3. Reduce the heat and simmer for five minutes.

4. Remove the pot from the heat and let it steep for 30 minutes, until completely cold.

5. Strain the sauce through a piece of cheese cloth to remove the solids.

6. Stir in the yuzu juice and place the sauce in a small jar for later use.

Note: It can be used plain—as a dipping sauce—as a marinade, or as the base of a more complex sauce—like teriyaki sauce.

1 . Take the juiced half of each fruit and cut a small hole at the top.

2. Slice the rind from the pole to the equator to open up the rind.

3. Lay the rind, skin side down and slice away the white pith.

4. Put the rinds on a small tray in a single layer and put the tray in the freezer. 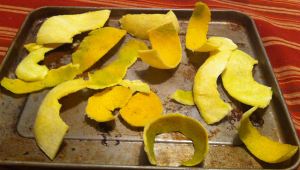 5. After an hour—when the skins are fully frozen—transfer them to a sealable plastic bag and store them in the freezer for later use.