I have been craving oxtails recently. I do not make them very often, because of Jan’s dietary restrictions and because, for the same reason, they are not exactly a health food—they are very fatty. One way to reduce the fat is to make them the day before, skim off the congealed lard, and reheat them the next day. 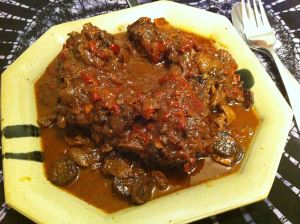 Note: Since my wife, Jan, cannot really eat this dish, I made her a mushroom soup.

One of my most popular recipes is my Moroccan Oxtail Tajine. I thought I would cross the Mediterranean and do something Spanish this time.  I looked at many recipes labeled Spanish oxtail and Basque oxtail, but nothing was quite like what I had in my head. This is not a traditional Spanish oxtail recipe, but more of a Viking raid on Spanish ingredient.

Starting with Spanish chorizo and wine, I revisited an old recipe for chicken for ideas. Roasted red peppers, oranges, and Spanish sherry vinegar were in. I also wanted to use Pimentón de la Vera—hot smoked paprika.  A long slow braise in these Spanish ingredients was just what I was longing for.

Note: Even if you are not watching your fat intake, it would be a good idea to skim off some of the fat. After hours of simmering in meat and spices the grease floats to the top of the sauce. In cooking my oxtails the day before, I removes almost ¾ of a cup of lard—and that does not include the lumps of fat imbedded within the meat. Some might simply discard this flavorful heart clogging bounty. I am reserving it for making a Spanish rice another day.

1. Put the red peppers under the broiler for 3-5 minutes per side, until well blistered.

Tip: Put the roasted peppers in a sealed plastic bag until they are cool, before removing the skins. The bag helps steam the vegetables and makes it easier to remove the skins.

2. Lightly oil a Dutch oven and place the oxtails in a single layer.

3. Place the uncovered pot in the oven and broil, turning the meat as necessary until the meat is well browned on all sides.

4. While the meat is broiling skin the peppers and grate the onion and tomatoes.

Tip: I need to have the tomato seeds removed, so after I grated the tomatoes I pushed the pulp through a sieve to remove the seeds and much of the skin. This is optional.

5. Transfer the Dutch oven to the stove top and remove the oxtails to a plate.

6. Spoon out all but two tablespoons of the grease released by the oxtails and add the grated onion and salt.

7. Over a medium heat, cook the onion for two minutes and then add the grated tomato.

8. Continue cooking, stirring and scrapping the bottom of the pot frequently, until the vegetable paste has darkened.

Tip: This may take 10-15 minutes, depending on how hot your stove is set. Higher heat may be faster, but risks burning the sauce.

9. Scrape the vegetable paste to the edges of the pot and add the garlic to the hole in the center.

10. Sauté the garlic until fragrant, about one minute, and then stir in the orange juice.

Tip: Use the orange juice to deglaze the pot.

11. Stir in half of the bottle of wine and return the oxtails to the pot.

12. Slide the orange peels and bay leaves between the oxtails.

13. Sprinkle the Pimentón and black pepper over the meat.

14. Tear the red bell peppers into large pieces and scatter the peppers, onion and chorizo over the oxtails.

15. Add more red wine until the fluid level is near the top of the oxtails, but not covering them.

Note: I used the entire bottle of wine.

Tip: You may do this on the stove top, but I prefer using the oven. You have more control over the heat and you are less likely to scorch the bottom of the pot.

17. Braise the oxtails for three hours, flipping the meat over every hour.

Tip: This puts all sides of the meat into contact with the sauce and prevents the tops of the oxtails from burning.

Note: After the first hour you may prop the pot lid open with a spoon. This allows some of the steam escape, reducing the sauce.

18.Remove the Dutch oven to the stove and transfer the oxtails to a serving platter.

Tip: If you do not plan to reheat the oxtails, tent them with foil to keep them warm.

19. Let the sauce rest for 10 minutes and then spoon off the excess grease that has floated to the top.

Tip: The most effective method to remove this fat is to cook the oxtails up to this point the day before and to let the sauce cool completely. It is then easy to scrape the congealed lard off of the surface. You may then reheat the oxtails in the sauce.

20. If your sauce is not thick enough you may continue to simmer it until it has reduced to your liking or add some thickener—flour, corn starch, etc.

21. Stir in the sherry vinegar and spoon the sauce over the oxtails.

22. Serve warm with rustic bread on the side.