It is my birthday, so I get to choose the menu. For me, lamb—especially Greek lamb—is the usual meat of preference. A Greek salad an obvious side dish. 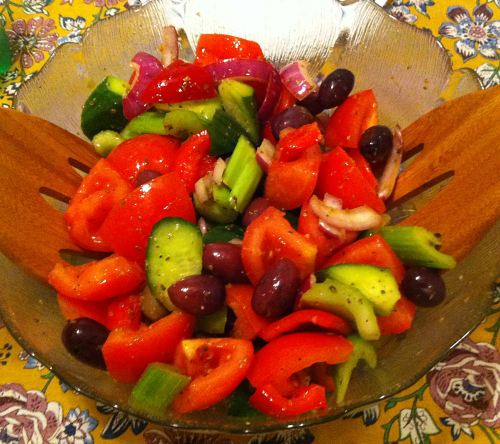 1. Mix the dressing ingredients in a small lidded jar and let it meld while you prepare the vegetables.

3. Pour the dressing over the vegetables and toss to coat

4. Marinate the vegetables for at least 1 hour—up to 4 hours—in the refrigerator.

Tip: Toss the vegetables occasionally to redistribute the dressing.

Note: Do not cut the tomatoes until just before serving the salad, as they go mushy and unappealing fairly quickly.

5. Just before serving, cut and add the tomatoes to the salad.

6. Toss to coat and mix the tomatoes into the salad.

Tip: If necessary, transfer the salad to an attractive salad bowl.

7. Serve slightly chilled with the feta on the side for the diners to add as it pleases them.