The first time I made bierock—German pocket breads—I made it the way it would be done in Germany, with a minimal ingredients list—mostly beef, onions, and cabbage. Wife Jan was unimpressed. She found a Volga German recipe with a fair amount of spices added—these she liked much better. Jan then had a fancy—What if a Volga German traveled east on the Silk Road to Kashgar. What kind of bierock would he make then?

Note: The Uyghurs are the Chinese minority that live in Kashgar. I highly recommend putting visiting this city on your bucket list.

Although both are a form of pocket breads, one might first ask how a bierock is different from a Uyghur samsa. The answer is, of course, in the dough. A bierock has a raise yeasted bread wrapper verses what is essentially an egg noodle wrapper for the samsa.

As far as what goes inside the wrapper, while a German could not lose the onions and cabbage in the original recipe. One necessary change would be to use lamb, instead of beef. The Uyghur’s also have a distinctive spice blend that they put on lamb.

The secret to Uyghur Shashlik is the spices.  I have read published recipes that are little more that cumin, pepper and salt.  That is not what I had in Kashgar—although I am sure that each seller had their own secret blend.  Paul Prudhomme’s Meat Magic also comes close to what I remember and I have frequently just use this as a short cut. The spice blend below is my attempt to recreate the flavors of memory.

1. Put the dry ingredients— flours, sugar, and salt—into a sifter and blend them together well.

2. Put the milk in a large measuring cup and microwave it for one minute.

Tip: Some low powered microwaves may take longer. You want the milk warm, but not boiling.

4. Stir and let the yeast proof for 10 minutes.

Tip: If your yeast is good there should be a good head of foam covering the mixture after this time. If there is not, discard and buy new yeast.

5. Add 3 tablespoons of butter to the milk.

Tip: This both melts the butter and cools off the milk. You want it to be cool enough that it does not cook the eggs when you add them to the milk.

6. Scramble the eggs into the milk.

7. Make a “well” in the flour and add the yeast mixture, milk/butter/egg mixture.

8. Pull the flour from the sides of the “well” into the wet ingredients.

9. When the flour in the bowl is mostly incorporated, turn the dough out onto a well-floured smooth surface.

Tip: Put about half a cup of flour on the board.

Note: I prefer to make my initial dough a bit wet. It is easier to knead more flour into a wet dough than to add liquid to a dough that is too dry.

10. Knead the dough for 10-15 minutes until the dough is smooth and elastic.

11. Add rub the dough bowl with some melted butter and rub the top of the dough ball in the butter.

12. Turn the dough over and cover the bowl with a smooth, clean, damp, kitchen towel.

Tip: Place the bowl in a warm place for one hour.

Note: Do not use a terrycloth towel, the dough might stick to it as it rises and be hard to remove.

13. Put all of the ingredients into a spice grinder and process to a course powder.

14. While the dough is rising, put the lamb in a medium mixing bowl.

. Add the soy sauce, 2 teaspoons of the spice blend, and hot water to the meat and mix them in well.

Tip: As well as adding some moisture, the hot water warms the lamb fat and makes the meat easier to mix.

Note: The recipe above produces slightly more than 5 teaspoons of this spice blend. You will add the rest of the spices towards the end of the cooking time.

16. Add one tablespoon of melted butter to a large pan over medium high heat.

17. Form the meat into a single large patty, about half an inch thick.

18. Fry the patty for about ten minutes on one side, until crispy  and well browned.

19. Turn the patty over and continue frying until well browned on the second side, about another 6-8 minutes.

20. Remove the meat patty to a plate to cool.

21. Spoon out all but two tablespoons of the grease from the pan.

Tip: Reserve the grease for later.

22. Deglaze the pan with a little water and then add the onions.

23. Sauté the onions with the salt until they are starting to pick up some color, about five minutes.

24. Add the cabbage to the pan and continue sautéing until the vegetables are soft, about another 5-8 minutes.

Tip: Stir the cabbage frequently, so that it cooks evenly and does not scorch from resting against the hot pan for too long.

Tip: Using two forks to break up the meat keeps your finger clean.

26. Pull the vegetables to the sides of the pan and sauté the garlic in the hole in the center.

Tip: Add some of the reserve grease to the garlic, if necessary.

27. Stir the garlic into the vegetables and add the browned lamb pieces.

28. Fold in the remaining spice blend, soy sauce, and the cumin and black cumin seeds over the meat/cabbage mixture.

29. Remove the pan from the heat and let it cool as you prepare the wrappers.

30. Punch down the dough and divide it into portions.

31. Divide the dough into 12 portions and pull in the sides into to make 12 dough balls.

Tip: This is a raised dough that depends on gluten sheets for its “lift.” When you cut your dough, there will be an outside surface—smooth—and two “cut” surfaces—covered in bubble holes. Stretch the outside surface around and push the point of the pie slice into the center of the balls. Lay the balls down with the crimped side down.

32. On a lightly floured board, take a dough ball with the “crimped” side up and roll it into a disk about 7 inches in diameter.

33. Place one quarter of a cup of filling in the center of the disk.

Tip: The meat mixture in the pan is fairly loose. I found—that by using a spatula and a ¼ cup measure—I could pack the filling down and place it in a tight packet in the middle of the dough. This made it easier to wrap the dough around the filling.

34. Pull the edges of the dough over the filling and twist then together.

Tip: Pick up the two opposite edges of the dough and pinch them at the top with one hand. Pick up the other two edges and bring them to the top. You will have four folds of dough sticking out from the sides. Pull each of these to the top, in turn and pinch and twist them together. Lay the bierock on the counter sealed side down and cup your hands around it and gently rotate the tough to further twist the dough. use your hands to gently form the dough into an even “bun” shape.

35. Lay the finished bierock on a baking sheet covered with parchment paper.

37. Sprits the tops of the bierocks with water and sprinkle on a few black cumin seeds.

Tip: Rotate the tray after 15 minutes, so that they bake evenly.

39. Transfer the bierock to a wire rack for 10 minutes to cool.

Note: The bierock are tasty both warm and cold. 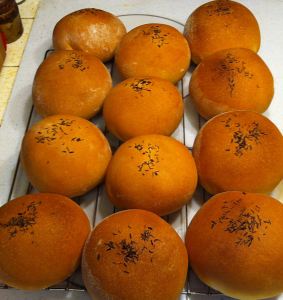