I love stuffed breads, whether you call them a samsa, a pasty, a samosa, or a bierock. While making them can be a lot of work—you are first making some kind of stew, letting it cool, making the dough, and then filling the dough with the stew, before baking them all together—the payoff is well worth the added labor. Packet breads are a convenient, grab-and-go meal for lunches and I usually get two, or even three, meals for the three people out of one recipe. 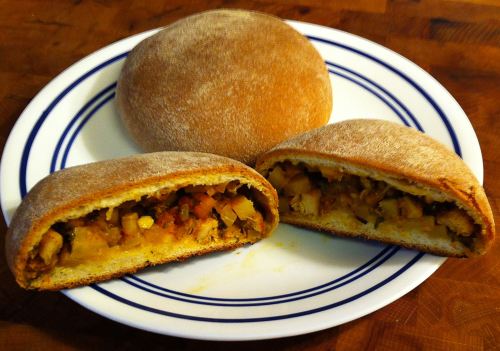 I have finally converted my wife into a bierock believer—she was dubious about my first attempt at bierocks, they were a little too authentically German. When she discovered Volga German bierocks—more spices and flavor, she fell in love. Over the last month, she has requested bierocks with Uyghur flavors (lamb and cumin), Indian flavors (chicken curry)—I have also done a chicken apple sausage bierock.

This week she wanted something new inside a bierock. We knocked around ideas about chicken paprikash, goulash, or even a stuffed cabbage filling. Each idea did not quite fit the hole in her head. We finally decided that a Moroccan chicken filling would fit the bill—after rejecting Moroccan beef, lamb, and oxtail.

1. Put the dry ingredients— flours, sugar, and salt—into a sifter and blend them together well.

2. Put the milk in a large measuring cup and microwave it for one minute.

Tip: Some low powered microwaves may take longer. You want the milk warm, but not boiling.

4. Stir and let the yeast proof for 10 minutes.

Tip: If your yeast is good there should be a good head of foam covering the mixture after this time. If there is not, discard and buy new yeast.

5. Add 3 tablespoons of butter to the milk.

Tip: This both melts the butter and cools off the milk. You want it to be cool enough that it does not cook the eggs when you add them to the milk.

6. Scramble the eggs into the milk.

7. Make a “well” in the flour and add the yeast mixture, milk/butter/egg mixture.

8. Pull the flour from the sides of the “well” into the wet ingredients.

9. When the flour in the bowl is mostly incorporated, turn the dough out onto a well-floured smooth surface.

Tip: Put about half a cup of flour on the board.

Note: I prefer to make my initial dough a bit wet. It is easier to knead more flour into a wet dough than to add liquid to a dough that is too dry.

10. Knead the dough for 10-15 minutes until the dough is smooth and elastic.

11. Add rub the dough bowl with some melted butter and rub the top of the dough ball in the butter.

12. Turn the dough over and cover the bowl with a smooth, clean, damp, kitchen towel.

Tip: Place the bowl in a warm place for one hour.

Note: Do not use a terrycloth towel, the dough might stick to it as it rises and be hard to remove.

13. While the dough is rising, cut the raw chicken thighs into pieces—½ x ½ inch pieces.

Tip: Blot the chicken dry, before you cut up the meat. You are using a dry rub in this recipe and you want as little moisture as possible, so that when you fry the chicken you get a good amount of browning.

14. Put the chicken in a medium mixing bowl and sprinkle 1½ tablespoons of spice mix and half a teaspoon of salt over the meat.

Tip: Mix the spice in well to coat each piece of the chicken.

16. Slice the onions, pole to pole, into thin moons, reserve.

18. Melt one tablespoons of butter in a large pan over medium high heat.

19. Form the meat into a single large patty, about half an inch thick.

Note: While I have used this America’s Test Kitchen technique many times with ground meats, this is the first time I tried doing it with coarsely chopped chicken. I think it turned out rather well.

20. Fry the patty for about ten minutes on one side, until crispy  and well browned.

21. Turn the patty over and continue frying until well browned on the second side, about another 6-8 minutes.

22. Remove the meat patty to a plate to cool.

23. If necessary, deglaze the pan with a little water and then add the rest of the butter

24. Sauté the onions with the rest of the salt until they are starting to pick up some color, about five minutes.

25. Add the cabbage and mix the onions and cabbage together.

26. Add one tablespoon of water to the pan and cover the pan.

Tip: Steaming the cabbage reduces its volume considerably and allows more contact between the cabbage and the surface of the pan.

27. After 2-3 minutes, remove the lid and add the diced artichoke.

28. Continue sautéing the vegetables for another 5-6 minutes.

29. Pull the vegetables to the sides of the pan and add the garlic to the hole in the center.

30. Sauté the garlic until fragrant, about one minute.

31. Mix the garlic into the vegetables and pull them to the sides of the pan again.

32. Add the tomato paste to the hole in the center of the pan and sprinkle on the rest of the spice mix.

33. Sauté the tomato paste and spices until they start to darken, about 2-3 minutes.

Tip: Cooking the tomato paste deepens the umami flavor through the Maillard reaction.

34. Add the tomatoes and use the released juices to de-glaze the pan.

35. Stir in the diced apricots and ginger.

36. Simmer the vegetables until they are soft, about another 5 minutes.

37. While the vegetables cooking, break the chicken patty into small bits.

Tip: Using two forks to break up the meat keeps your finger clean.

38. Fold in the chicken and parsley into the vegetables.

39. Remove the pan from the heat and let it cool.

40. While the stew is cooling prepare the wrappers.

41. Punch down the dough and divide it into portions.

42. Divide the dough into 12 portions and pull in the sides into to make 12 dough balls.

Tip: This is a raised dough that depends on gluten sheets for its “lift.” When you cut your dough, there will be an outside surface—smooth—and two “cut” surfaces—covered in bubble holes. Stretch the outside surface around and push the point of the pie slice into the center of the balls. Lay the balls down with the crimped side down.

43. On a lightly floured board, take a dough ball with the “crimped” side up and roll it into a disk about 7 inches in diameter.

44. Place one third of a cup of filling in the center of the disk.

Tip: The meat mixture in the pan is fairly loose. I found—that by using a spatula and a ⅓ cup measure—I could pack the filling down and place it in a tight packet in the middle of the dough. This made it easier to wrap the dough around the filling.

Note: If you read my other bierock recipes I have alternated on how much filling to add to each rapper. One Quarter of a cup is easier to wrap without tearing the wrapper as you try to seal it. While wrapping a third of a cup of filling can be a struggle, it produces a much more satisfactory bread to filling ratio after it is baked.

45. Pull the edges of the dough over the filling and twist then together.

Tip: Pick up the two opposite edges of the dough and pinch them at the top with one hand. Pick up the other two edges and bring them to the top. You will have four folds of dough sticking out from the sides. Pull each of these to the top, in turn and pinch and twist them together. Lay the bierock on the counter sealed side down and cup your hands around it and gently rotate the tough to further twist the dough. use your hands to gently form the dough into an even “bun” shape.

46. Lay the finished bierock on a baking sheet covered with parchment paper.

Note: I find that I need two large lipped baking sheets to do 12 bierocks.

Note: Do not let the dough rise too long or your bread layer may collapse.

Tip: Rotate the tray after 15 minutes, so that they bake evenly.

49. Transfer the bierock to a wire rack for 10 minutes to cool.

Note: The bierock are tasty both warm and cold.