Since I discovered a decent canned version of Hollandaise sauce, I have been making Eggs Benedict at least once a week. As I was posting my latest variation of this famous dish I wanted to link to my posting of the recipe, I discovered that I had never posted the recipe. I cannot really call it “Karl’s” recipe, because this is what you will get from many restaurants for about $10. 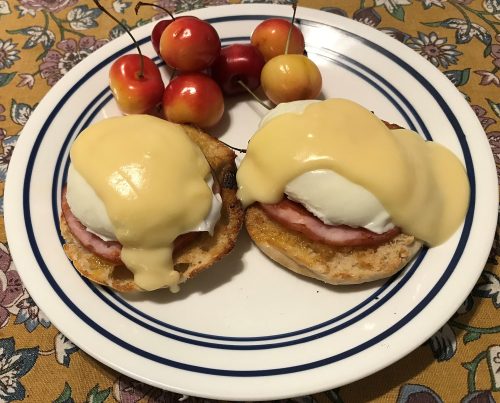 At the high end restaurants I am sure that they bake fresh English muffins, blend Hollandaise sauce from scratch, and use artisanal ham, but expect to pay far more than $10 for such a dish. Many places though use Thomas’ English muffins, Aunt Penney’s Hollandaise sauce, and Canadian bacon. You do not need to go to a specialty restaurant store, as all three of these ingredients are commonly available in the U.S., making it easy to make this dish at home.

For me making my own Hollandaise sauce is a non-starter. Most recipes make about ¾ of a cup of sauce that does not keep well—Jan does not like it and there is a trick to not breaking your sauce when you try to reheat it—for me a stable canned sauce is the only option. For those wishing to make their own Hollandaise sauce here is a good one that I found on-line. I remember my father making Hollandaise sauce for special breakfasts, but he never wrote down his recipe—but he did mention that there was no butter in his recipe. Searching for one like the one my father made, here is an oil based recipe.

For each person being served

1. Cut the muffin in half crossways and lightly toast it.

Note: This forms two thinner circles of muffin. You want the muffins toasted, but not so much the edges become hard or burnt. You may add butter to your muffins halves which might seem a bit dry without it.

2. While the muffins toast, poach the eggs, about 5-6 minutes in hot simmering water.

Tip: You do want your water to be hot enough to cook your egg through, but you do not want it to be at a roiling boil as it will knock the egg about creating an excess of foamy whites.

Note: Many people poach eggs in a large pot of boiling water. I personally do not care if I end up with smooth, fluffy-white free eggs. I put about an inch of water in a small skillet, which gives me more control over the process. I put 1-4 eggs in the simmering water. After about a minute I slide a small pancake turner under the egg(s) to make sure they are not stuck to the pan. After another minute I flip the egg(s) over—you want the bottoms to be well set before doing this as the whites may break and your egg will fall apart. You must also be careful not to poke into the yolk with the corner of the turner. After another two minutes turn the egg(s) over a second time. Continue simmering the egg(s) until they are done to your satisfaction—lift the egg slightly out of the water and poke at the edge of the yolk— you want the white fully set, but the yolk still thick and runny.

a. Set the bagel halves holey sides up on your plate.

Tip: Add the butter at this time, if you wish.

b. Lay the Canadian bacon on the muffin halves.

c. Set the poached eggs on top of the ham.

Note: I fold a paper towel and as I remove the egg(s) from the water I set the turner on the paper briefly to blot away any excess water. If you go strait from the pot to the muffin you hazard ending up with soggy bread.

d. Spoon the Hollandaise sauce over the eggs.

One response to “Diner Eggs Benedict”