Poké is an Hawaiian dish of seasoned raw fish. By itself it is not a full meal, it needs a starch and vegetable side dishes. Normally, I would set these each out in separate bowls, so my diners could take as much or as little as they wanted of each item. However this time I thought I would get a bit fancier. I decided to turn this meal into a Japanese-Hawaiian fusion as a poké chirashi sushi—scatter sushi. Chirashi sushi is sushi rice with various ingredients attractively scattered over and around it. 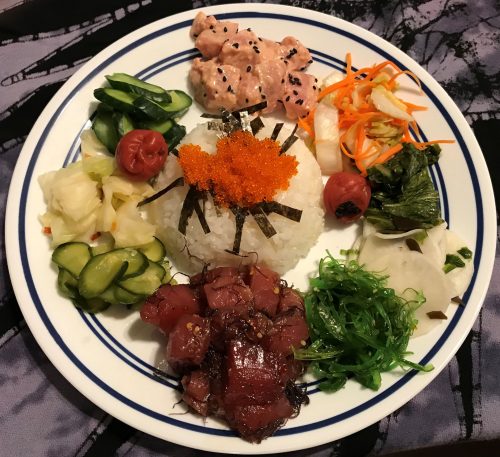 Note: This is the final assembled dish that my last seven posts have been building towards. I posted them separately, because I did not think that everyone would want to make this dish this way, but that they might want to try some of the individual sub-recipes.

I found an inexpensive source for ahi at my friendly local Hawaiian market—Kumar’s Island Market. I ended up buying 2 pounds. When I told my son-in-law Chris about this he asked me to save him a half a pound for his own poké recipe.

Chirashi sushi uses sushi rice as a base for the ingredients placed on or around it. I already had two sources of protein, now I just needed some vegetables to round out the meal. As usual, I went overboard with 12 additional toppings.

Note: For the master poké chirashi sushi recipe, I took small serving of each of the pickles that I had made—or bought—and “scattered” them around my fish and rice. It has taken time to write up what turned out to be seven separate new recipes that all ended up on one plate. While some of these postings may seem repetitive—to my faithful readers—I have learned that many people see only one or two of my individual recipes postings.

Note: Items are listed starting in the center of the photo and then moving to noon and working clockwise around the plate. For each serving:

1-2 sheets of nori, cut into quarters

1. For each serving arrange these ingredients on a large plate in the order shown above.

2. Serve with soy sauce, wasabi, and quarter sheets of nori on the side.

Tip: The nori sheets are for any diner who wishes to make hand rolled sushi with the ingredients on their plate.