Jan is still struggling with her cold, so she wants soup for the second day in a row. I did not want to make the same thing I did yesterday, so I was trolling through the WordPress reader for soups. I looked at several, before one finally caught my eye. 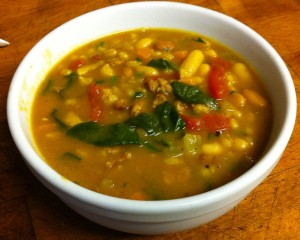 I want to make something warm, hearty and sustaining. I plan on a lot of garlic to help fight her cold. In addition, I would like a lot of vegetables for the vitamins.

Chicken with Gnocchi? That is too close to what I made yesterday. Soupe de Poisson Provençal? That sounded good enough to save to my sort file, but I am planning bouillabaisse for this weekend. How about Pea Soup? Jan may like it, but I do not particularly enjoy pea soup. Could Bean and Barley Soup be a possibility? Yes, it could!

I have made many different bean dishes over the last year and this has left me with little bags of different beans that are not enough for a dish on their own. In June I used some of these to make Ham and Five Beans. That was very tasty. If I added more vegetables, and thinned this out it would make a hearty dinner soup and use up some of these stray beans.

I really like barley. My favorite soup is Scotch Broth, but Jan does not like lamb in soup. I tend to make this for myself when she leaves for a long trip. But the idea of beans and barley together is not something I would have naturally come up with.

However, once suggested it seems like a good paring. Looking on-line there are many recipes. While many of them seemed likely, I have decided to do a more individual recipe. What do I have on hand that would be good in this soup?

Some onion, carrots and celery, a mirepoix, is frequently a good start to many dishes. I do not have any ham in my freezer at the moment, but I do have half a pound of Italian sausage, left over from the soup I made on Sunday. Jan and Karen, my sister, also mentioned that they really liked the fennel in that soup.

What herbs or spices should I use? The fennel and the Italian sausage are already dominating flavors. A good bit of black pepper could hold its own. I also decided on a small amount of thyme and bay leaf to act as high and low notes.

Eilene complained about the lack of tomatoes in one of my soups recently. I think what she was really missing was the umami, that savory flavor that is the fifth taste. Since we are all allergic to monosodium glutamate, I have been adding a bit of tomato paste and anchovy paste. Not so much as to taste tomato-y or fish-y, just enough to balance the dish.

If I saved back some of the onions, carrots and celery to add at the end of cooking they would add a crunchy texture to the soup. Karen left us a few tomatoes and yesterday’s spinach also seems like things that I could add toward the end. These would add color, as well as important vitamins that might cook away if added too early. Finally, I want to add for parsley at the last minute to add a fresh vegetal note to complete the dish.

1. Sort and wash the beans.

2. Put the beans and 2 teaspoons of salt in a soup pot with 6 cups of water. Bring to a boil, cover and remove from the heat. Let the beans stand for one hour.

Tip: I usually prefer to use an overnight soak for beans. I decided to make this soup today, so I am using a “quick soak” method.

3. Add the barley and continue soaking for a second hour.

4. Drain the barley and beans and rinse them once to remove the excess salt.

Tip: The barley and beans will have absorbed some of the salt. The salt will also have made the bean hulls softer by replacing some of their calcium with sodium.

5.  Remove the barley and beans to a bowl and wipe out the pot.

6. Add one tablespoon of olive oil to the pot and brown the Italian sausage, breaking it into small pieces. Remove to the bowl with the beans.

7. Without cleaning the pot, add ¾ of the onions and sauté them until they are just picking up some color, about 5 minutes.

Tip: The vegetables that you add at the beginning will break down into the soup. Reserve a quarter of each of the vegetables to add to the pot later. Keep these in a bowl separate from the beans.

9. Pull the vegetables to the edges of the pot and add ¾ of the garlic to the hole in the middle.

10. Sauté the garlic until fragrant, about one minute and then mix in the rest of the vegetables.

11. Add two cups of chicken broth and the herbs and spices.

Tip: Remove the bay leaf and return it after blending the vegetables.

13. Remove the pot from the heat and when the soup is cool enough to handle, process in a blender until smooth.

Tip: You may speed up the cooling by adding one of the remaining cups of broth.

14. Return the soup to the pot and add remaining chicken broth, barley, beans, meat, and 3 cups of water.

Tip: Use the water to rinse out the good bits in the blender.

15. Bring the pot to a boil, cover and reduce the heat. Simmer for one hour.

16. Check the beans for doneness. They should be almost tender

Tip: If they are not yet done give the soup 10 more minutes. Add more water or chicken broth if the soup seems too thick.

17. Add the reserved vegetables and continue to simmer, covered, for 15 more minutes.

18. Stir in the tomatoes and spinach. Simmer for 5 more minutes, covered.

19. Stir in the parsley and serve.