Son-in-law, Chris, is leaving on another trip, so the kids are not coming over for Sunday dinner. Jan requested something forbidden by his ketogenic diet, lasagna. Since this is also our anniversary week (31st) I agreed to make it for her. I also made her favorite salad, carrot, to go with it. 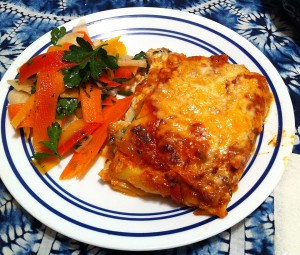 While I make this dish several times a year, I usually give it away as a mitzvah to sick friends. If my family gets any it is only a few small servings from around the edge. Jan has had a rough week, where she ate conference food for most of her meals. Jan wants a lasagna for herself with plenty of leftovers for lunches during the rest of the week.

I make my lasagnas as a complete meal—protein, starch and vegetables. The idea is to provide the sick friend and their caregiver a quickly warmed, home cooked, balanced diet when eating may not be the first things on their minds. Unfortunately, I have had to make several of these in the last year.

I was thinking about being creative, but Jan quickly put the hammer down on that idea. She wanted the lasagna I usually make—one of the conferences she was at involved creative cooks trying to outdo each other. She did, though, allow me to make my own Italian sausage as the meat for this lasagna.

Note: I also switched out the Parmesan with  Pecorino Romano. I really can’t help myself.

Most store bought Italian sausage includes an over powering amount of fennel seed. Cook’s Illustrated recently had an article about making your own Italian sausage. While I did not stick to their recipe, they included several useful techniques to get crusty, flavorful, but still moist sausage.

While each step of building lasagna is not particularly difficult, there are a lot of steps to the process.  I use the term building, rather than making, because unlike most dishes where you put all of the ingredients in and stir, good lasagna is build layer by flavorful layer.

This is not a simple, small or inexpensive recipe. There are a lot of steps and pots used in making lasagna. As written, it feeds 12 hungry people, or three people for four meals and the cost per meal is not out of reason. Fortunately, it also freezes and reheats well.

While very delicious, lasagna should not be mistaken for a health food. Even my low fat version is relatively high in fat (lots of cheese) and high in carbohydrates.  Lasagna is the ultimate Italian comfort food.

After Dinner Note: Jan felt that the Pecorino Romano cheese was too strong a flavor for this dish. She would have preferred that I had stuck with the Parmesan. This opinion did not prevent her and Eilene from returning after dinner to “straighten out the edges” of the remaining lasagna.

1. Coarsely grind the pork and place it in a medium bowl.

Tip: If you do not own a meat grinder buy pre-ground pork.

2. Dissolve the salt and baking soda in 1/3 cup of water in a small measuring cup.

3. Pour the contents of the cup into the meat and mix it in well. Let the meat rest for 10 minutes.

Tip: The salt will season the pork and the baking soda tenderized the meat and helps it to retain moisture while you are frying it. Do not let the meat sit too long after adding the baking soda or it will turn mushy.

4. Add the parsley, garlic and seasonings to the pork and use a spatula to knead the meat.

Tip: Stir the meat and then pull the spatula towards you in long strokes. Keep repeating this pattern until the meat starts to discolor and thicken.

Note: The salt will have dissolves the protean fibers. This stirring causes the proteins to start linking and forming a network, in the same way that gluten does when you knead bread.  It is this mesh of protein that gives sausage its distinctive texture.

5. Form the meat into a large patty and fry until well browned on both sides, about three minutes to the side.

Tip: You may divide the meat in half and fry as two patties, to get more browning. You are trying to just get a good dark crust, but it is not necessary to cook them completely. Chop the patties into small bits and set them on a plate. Refrigerate until you are ready to assemble the lasagna.

6. Finely dice a large onion (you want about 1½ cups) and the celery.

7. Without cleaning the pan, add the onions and celery. Sauté until the onions are well caramelized (about 15 to 20 minutes).

Tip: Be careful to keep stirring the onions, so that they do not burn.

8. Pull the vegetables to the sides of the pan and add the remaining one tablespoon of olive oil.

10. Stir in the 24 oz. jar of spaghetti sauce and 2/3 of a jar of water. Bring the pan to a boil, stir to combine and remove from the heat to cool completely.

Tip: You may add only half of the water before boiling and then add the rest to cool it off more quickly. This sauce may seem a bit “watery,” but this is necessary for this dish. The no-boil noodles will absorb most of the excess fluid. If you are planning on using boiled noodles, do not add the extra liquid.

11. While the sauce is cooling, bring a large pot of water to a boil and place a bowl of ice water in the sink.  Blanch the spinach for three minutes and then place it in the ice water to stop it from over cooking.

Tip: If using frozen spinach blanch it only one minute.

12. Drain the water and, taking a fist full of spinach at a time, squeeze as much water out as you can. Repeat until all of the spinach is dry and you have several ‘sausages’ of spinach.

13. Finely slice the spinach ‘sausages,’ fluff the spinach slightly and return it to the bowl.  Refrigerate until you are ready to assemble the lasagna.

14. Shredded the Mozzarella cheese and refrigerate until you are ready to assemble the lasagna.

16. Place the basil, Ricotta cheese, ½ cup of Parmesan cheese, the egg, black pepper, and salt into a bowl and mix into a smooth paste. Refrigerate until you are ready to assemble the lasagna.

b. Arrange 5 overlapping noodles crosswise over the sauce. (Barilla no-boil noodles are only 8 inches long, so I usually split one lengthwise and lay them lengthwise to fill the gap that remains on one side of the pan.  I also alternate the side of this filler for each layer of the lasagna.)

c. Gently spread half of the Ricotta mixture over the noodles. The mixture does not need to cover every inch.

d. Scatter the spinach over the Ricotta mixture.

e. Set aside ¾ cup of the Mozzarella.  Scatter ½ of the remaining cheese over the spinach.

g. Pour 1 cup of the sauce evenly over the cheeses.

h. Repeat steps b and c.

Tip: After laying down the dry noodles, gently press down on them to even out the wet layers underneath. Be careful not to break the noodles.

i. Arrange the sausage bits evenly over the Ricotta.

j. Scatter remaining ½ of the Mozzarella cheese over the sausage.

l. Set aside ¾ cup of the sauce and pour the rest evenly over the cheeses.

m. Lay down the final layer of no-boil noodles.

Tip: After laying down the dry noodles, again gently press down on them to even out the wet layers underneath. Be careful not to break the noodles.

n. Pour the remaining sauce evenly over the top layer of noodles.

Tip: If there does not look like there will be enough sauce to cover all of the noodles add a little water to the sauce before you start.

Note: you should have ¾ cup of Mozzarella cheese and ¼ cup of Romano cheese remaining.

Tip: It is a good idea to have a large lipped baking pan on the rack under the lasagna, because it tends to bubbles over and drip.

20. Remove the foil and sprinkle the remaining cheeses evenly over the lasagna.  Continue baking for about 25 minutes, until the cheese is browned and the sauce is bubbling.

21. Cool uncovered for 15 minutes before slicing into portions. Serve with a salad on the side.