Adapted from a Fine Cooking recipe

Jan loves lemon curd, so a while ago I made some with Meyer lemons. It worked out so well that I have made it a couple of times. It is really tasty, but it does not last or keep long. 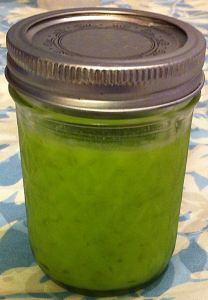 Recently, I had a though—If lemon curd, why not lime curd? It was an easy substitution. The only change I had to make to the recipe was to the color. The curd came out sort of a grey green while it was cooking and a drop of food color fixed a rather unappetizing tint.

Many recipes for lemon curd discussed the difficulty of straining out the egg whites. If you not cook the curd exactly right, bits of the egg whites would cook into unsightly white bits. The first recipe I tried was from Fine Cooking and I have never had any such problems.

Their technique was to cream the butter and sugar. Beat in the eggs and then beat in the lemon juice—I use an electric egg beater. This technique breaks apart the proteins of the egg whites into tiny and separated bits that cannot clump together into white blobs. As long as you do not let the pot come to a boil, the heating temperature ceases to be an issue.

Note: The Fine Cooking recipe calls for you to put the curd into a bowl covered with plastic wrap to prevent a “skin” from forming. This recipe produces about 2-3 cups of curd and I usually put it into 8 oz. canning jars. If you decide to go with jars, sterilize them while you are waiting for the ingredients to come to room temperature.

Tip: This will produce about one tablespoon of zest.

2. Put the lime zest in a small bowl and add the sugar. Mix well, breaking up any clumps of zest, and set aside.

3. Juice the limes (about five) and measure out ⅔ of a cup. Set the measuring cup aside.

Tip: When I was making lemon curd the juice was full of tiny seed bits and in straining it out I had to remove all of the pulp. The lime juice did not have any seeds and I added as much pulp as the juicer produced.

4. Set the butter and eggs on the counter and let them come to room temperature, about one hour.

5. In a medium bowl, beat the butter and sugar with an electric mixer, about 2 minutes.

Tip: I found that mixer could not break up all of the lumps of butter. Halfway through, I tool a rubber spatula and mashed the butter bits into the sugar and then continued mixing.

6. Add the eggs to the butter mixture, one egg at a time.

Tip: Mix the eggs in for two minutes on medium high between eggs. You want to break up and separate all of the bits of white.

7. Beat in the lime juice and continue beating for 2-4 minutes, until most of the juice in incorporated into the mixture.

Tip: Stop beating and push the mix out of the way, if there is still a lot juice puddled in the bottom of the bowl, keep beating. When free juice gets down to about a quarter of a cup you are done.

Note: The mixture will look curdled, but it will smooth out as it cooks.

8. Pour the mix into a medium, heavy-based saucepan. Start cooking the mixture over low heat until starts to look smooth.

9. Increase the heat to medium and cook, stirring constantly with a spatula, until the mixture thickens, about 15 minutes.

Tip: Constantly scrape the bottom and sides of the pot. You do not want any hot spots or bits sticking, where they may get over cooked.

Note: Never let the mix come to a boil! This would cause the eggs and butter to “break” and you would end up with a flavorful mess.

10. Cook the mixture until well thickened and it sticks to the back of the spatula.

Tip: Fine Cooking says to cook it to 170° F on a thermometer, but I prefer to go by eye. I cook the curd until it “looks right.”

11. Stir in one drop of green food color.

12. Remove the lime curd from the heat and transfer it to a bowl or prepared jars.

Tip: If using a bowl, press plastic wrap on the surface of the lime curd to keep a skin from forming and chill the curd in the refrigerator.

Note: The curd will thicken further as it cools and will keep in the refrigerator for a week and in the freezer for 2 months.