“True” Farro (Triticum dicoccum) is a Tuscan wheat. One source I read said that this is the grain that the Roman Legionnaires marched on. It is a marvelous grain to use in any dish that you would normally use rice or barley. 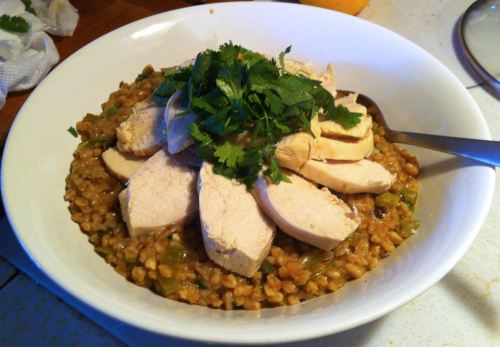 Semi-pearled farro is available at many Italian and high-end grocery stores. Making risotto with rice is a finicky, laborious process, but with farro you get that creamy-grainy texture without effort. Once you try this grain, it will become a staple in your cabinet.

Tip: Let the mushroom water settle and reserve most of the liquid, leaving behind the grit.

2. Add the olive oil to a 5 qt. soup pot over medium heat and sauté the onions with a pinch of salt, until just starting to pick up color.

3. Add the celery and cook until vegetables begin to soften, 3 minutes.

4. Add the garlic, bell pepper and mushrooms and cook for another minute.

5. Add the thyme and farro to the pot and toss to mix.

6. Add the broth and the mushroom water and bring to a boil.

7. Reduce the heat to a simmer, cover, and cook about 15 minutes, stirring occasionally.

8. Submerge chicken breasts in pot and cook covered for 20-25 minutes until chicken is fully cooked.

9. Remove chicken and wrap in foil.

10. Continue cooking the farro until most of the liquid has been absorbed and the grain is al dente.

Tip: Pour any chicken juices that have collected in the foil packet into the pot.

11. Stir in most of the cilantro and lime juice and cook the faro for three more minutes.

Tip: Reserve one tablespoon of cilantro as garnish.

12. Slice the chicken into thin strips and serve over a bed of farro, garnished with the cilantro.