Jan is off on her yearly stitching retreat with her friends for four days. While she will tolerate barbecued lamb, she will not eat it any other way. Her absence allows me to make dishes that Jan will not eat. 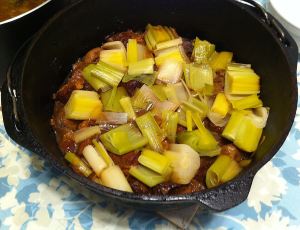 The last time I made barbecued lamb I had bought a whole leg, which was too much for the five of us. After cutting away a good chunk of meat to roast, I was left with several bones and about ¾ of a pound of meat. I had planned to make a dish for just Eilene and me, but now that Miriam has returned from her third trip to Italy this year, “resting up” includes a “papa meal.” To have enough meat for the increase number of diners, I ran out and got some lamb neck slices.

The flavor and toughness of a piece of meat depends on how much is was used in life. For many animals the neck muscles get the most use, as they are constantly reaching down to eat even when they are standing still. However, while the meat is very lean and flavorful, they are attached to large neck bones. The butcher usually cuts the neck into slices to make them easier to handle. Whenever my mother, Claudia, always bought neck slices to make her lamb stew.

Note: Unlike oxtails, which have been discovered by celebrity chefs, lamb necks are still relatively cheap—my mother’s other reason for buying them. She had seven hungry mouths to feed and a 1930’s influenced sense of budgeting.

I had several lamb bones cluttering up my freezer from past barbecues, with all of the neck bones, I decided that I did not want to fill the pot with the long leg bones. This led me to choose to make a lamb bone soup as a second dish. I picked different seasonings and vegetables, so the two dishes would not seem too much the same.

1. Cut the leg meat into one inch pieces and, if necessary, separate the neck slices into pieces.

2. Add the olive oil to a Dutch oven and brown the lamb well on all sides. Remove the pieces to a plate when done.

Tip: It may take several batches do brown the meat. Do not crowd the bottom of the of the pot. You want browned meat, not steamed meat.

3. Add the onions, celery, and salt to the pot and use the moisture released by the vegetables to deglaze the pot. Sauté the vegetables until soft, about five minutes.

Tip: Scrape every bit of the fond from the bottom of the pot, so that it does not burn.

4. Stir in the bay leaves, coriander, pepper, cloves, and broth, cover the pot tightly and place the Dutch oven in a 275º F oven.

Tip: This may seem like I am not adding enough liquid to the pot. The meat will release some moisture and a tightly sealed pot will keep most of the moisture in the pot during the long cooking time. You want the sauce to be fairly thick at the end of cooking, but you do not want the pot to dry out completely.

6. After about an hour in the oven, remove the pot from the oven and spoon off some of the grease that has floated to the top.

7. Stir the stew once and return it to the oven.

Tip: For the most part leave the pot to cook on its own. Check every hour to make sure that the liquid has not all boiled away.

8. Wipe and stem the mushrooms.

9. An hour before serving, gently push the mushrooms down into the stew in-between the chunks of lamb.

Tip: The meat will be close to falling apart tender, do not stir the pot or you will end up with a pile of shredded lamb.

11. Cut the leeks in half lengthwise and then cut them into 1½ inch chunks.

12. Scatter the leaks over the stew and continue cooking for another 20-30 minutes, until the leeks are fully cooked.

13. Bring the Dutch oven to the table and lift the lid to fill the room with the stew’s fragrance.

One response to “Karl’s Lamb Stew with Leeks”